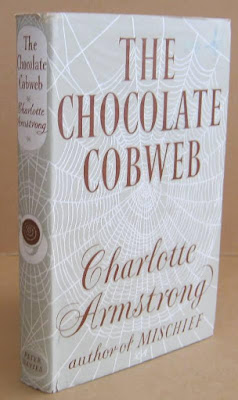 The Chocolate Cobweb reads more like a Nancy Drew novel in some ways. The ending seems a bit saccharine, and it is certainly saccharine compared to the film, Merci pour le chocolat, which is based on Charlotte Armstrong’s novel. It’s a satisfying read, in spite of its ending, and it’s always great to discover another source for noir that is written by a woman.

The Chocolate Cobweb opens in Los Angeles, with Amanda Garth and her mother Kate entertaining a cousin, Edna Garfield, who is visiting from New York. On the morning of her departure, the local newspaper has a feature on Tobias Garrison, a famous painter who is showing some of his work in a local gallery. Edna lets it slip in front of Amanda that there had been a mix-up at the hospital twenty-three years ago, when Amanda Garth was born. It seems Tobias Garrison thought she was his daughter when his wife had actually given birth to his son, Thone. Amanda is immediately curious about this bit of family lore and decides to visit the Peck Galleries, where she can find a showing of Tobias’s paintings.

At the Peck Galleries, Amanda sees Tobias’s most famous painting “Belle in the Doorway” and falls in love with it, so to speak. Mr. and Mrs. Garrison make a surprise visit to the galleries while Amanda is there, and their son Thone Garrison arrives soon after his parents. Amanda resolves to meet them all, but not at the Peck Galleries. Instead, she finds their phone number and home address and pays them a visit.

The novel then switches perspective: to Ione Garrison. She makes hot chocolate, sleeping pills in her left hand, and plots Thone’s “apparent suicide.” She tries to formulate a logical motive for him to commit suicide—something about a letter from a female friend or girlfriend. No one suspected Ione when she slipped pills into Belle Garrison’s drink, and she doubts anyone will suspect her now. Tobias Garrison uses chloral (its use as a sedative was more common in the late nineteenth century) to help him sleep, and Ione does the same with barbiturates, so everyone knows that the pills would be easy to come by.

Amanda uses art as an excuse to introduce herself to the Garrisons and to meet Thone. She paints and works as a designer, and she decides a little bit of artistic license will suit her needs:
She rehearsed again her little speech. It wasn’t a speech to be said over the telephone, nor could she make an appointment to say it. No, she must just go, just barge in. . . . [ellipses in original]
Take her courage in her hand. Courage? Crust, thought Amanda. Oh, well, blame it on Art. She wanted to paint, ergo, she was a little bit crazy. (page 29)

Amanda’s ruse works. And Tobias is curious about her when she reveals that they “met” twenty-three years ago, that is, when she and Thone might have been mixed up at birth:

. . . She said, “I am an art student, Mr. Garrison. And I haven’t quite as much n-nerve as I thought I had. I came because we’ve met before.”
“Is that so?” Tobias’ voice was smoother than she would have expected it to be. “I’m sorry. I don’t remember you. Perhaps you’ll remind me?”
Something touched the backs of her legs. Thone had brought her an armless chair. Amanda sat down with quite successful steadiness. She kept her back straight and leaned forward. “It was a long time ago, sir.”
His head cocked politely.
She said. “Isn’t it true, Mr. Garrison, that when your son was born, the nurse showed you the wrong child?”
He straightened, where he sat, with shock. “That’s so,” he said. His eyes held hers now and she was aware of nothing else.
“I am the wrong child,” said Mandy. “So you see, we have met, although I don’t remember you, either.” (pages 31–32)

During this same visit, Ione Garrison takes Amanda to Thone’s room to see another portrait of Belle. Ione purposely knocks over a thermos of hot chocolate, the one that readers know also contains the sleeping pills. Amanda helps clean up the mess with an old handkerchief, and Ione demands to have it so that she can clean it for Amanda. Amanda makes a switch and gives her a new, monogrammed handkerchief because she is now suspicious of Ione Garrison’s motives. Another possible intrigue in the making occurs on Amanda’s way out of the Garrisons’ house: Thone accompanies Amanda and requests that she talk to Tobias only of art and painting, not of Belle. Amanda gives the soiled handkerchief to her boyfriend Gene to test at a friend’s lab, and he discovers that the handkerchief has what he calls “sleeping dope” on it. Amanda begins to wonder if someone means harm to Thone, and she wants to warn Thone.

Thone goes to the Garths to confront Amanda. She admits that she is trying to confuse Ione about the circumstances of her birth because she’s upset about what she thinks are Ione’s murderous intentions toward Thone. She and Thone argue because he doesn’t believe Amanda. Amanda tells Thone that she will accept his father’s and Ione’s invitation to return to their home and that she will prove Ione wants to murder anyone having something to do with Belle. Amanda will convince Ione that she thinks she is Belle’s daughter and thus tempt Ione to murder her. Thone finally agrees to Amanda’s plan because he sees that she cares about what happens to him.

From this point on in the novel, the plot concentrates on Amanda’s attempts to solve what she thinks is Ione Garrison’s murderous plot and to discover if it has any connection to the death of Thone’s mother, Belle Garrison.

(This blog post about the novel The Chocolate Cobweb contains spoilers.)

I first saw Merci pour le chocolat, the 2000 French film based on The Chocolate Cobweb, quite a while ago, and I decided that I had to read the book. I had already read Mischief, also by Charlotte Armstrong, which I found to be dark (and thoroughly noir) but almost demoralizing because the characters were so unpleasant. In fact, I found Mischief mercifully short and the film based on it, Don’t Bother to Knock, so much more enjoyable.

Click on each title in the list below to see my blog post about each:
◊ Don’t Bother to Knock (film based on the novel Mischief)
◊ Mischief
◊ Merci pour le chocolat (film based on The Chocolate Cobweb)

So imagine my surprise at the conclusion of The Chocolate Cobweb, which reads more like a Nancy Drew novel in some ways. Amanda solves the mystery and escapes harm, and the young lovers (I won’t give the names for this detail away) are engaged to be married at the end. Quite the surprise! The Chocolate Cobweb was published in 1948, three years before the publication of Mischief. Did life experience darken Armstrong’s views of life and romance in the interim? Her fiction was published during the McCarthy era, so maybe politics and political corruption played a part.

I enjoyed reading The Chocolate Cobweb more than Mischief, although the ending seems a bit saccharine, and it is certainly saccharine compared to the film. Isabelle Huppert gives a commanding performance in Merci pour le chocolat. Her character, based on Ione Garrison, is the focus of the film, and Huppert never lets viewers forget that shift in focus from Amanda Garth in the novel to Marie-Claire (aka Mika) Muller in the film, no matter who is on-screen. The plot in the book is easier to follow: Armstrong’s writing is very clear. The film is a neo-noir in which all the details matter, and I found that reading the book after seeing Merci pour le chocolat the first time helped a bit, especially for the opening sequences, when I saw the film a second time. Seeing the film again made me appreciate the story, in print and on film, that much more.
Posted by Marianne at 7:57 PM