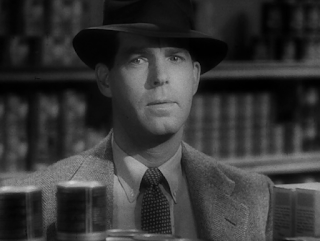 Billy Wilder directed many great films, some of which happen to be my personal favorites: Sunset Boulevard (1950), starring Gloria Swanson and William Holden; Some Like It Hot (1959), starring Marilyn Monroe, Jack Lemmon, and Tony Curtis; The Apartment (1960), starring Shirley MacLaine and Jack Lemmon. I have seen these films numerous times, but I hadn’t seen Double Indemnity for the first time, from beginning to end, until earlier this year.

My sister couldn’t believe that I call myself a fan of noir and I hadn’t seen the film for so long. I find it a little hard to believe myself. I often like to say that I prefer the book to the film and that I want to read the book before I see the film version. But I had read James M. Cain’s book, and I still balked at seeing the film for the longest time. And now that I have seen Double Indemnity, I see that it deserves all the praise that is directed its way. But I must confess that I struggled with writing this blog post. 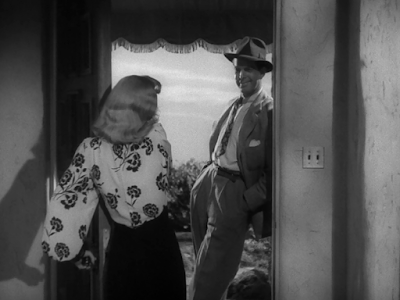 It has to do with the actor playing the male lead: Fred MacMurray as Walter Neff. MacMurray is wonderfully slimy as Jeff D. Sheldrake, C. C. Baxter’s (Jack Lemmon’s) boss who offers career advancement in The Apartment only if Baxter allows his apartment to be used as a love nest for company executives. But I just cannot see MacMurray as a romantic lead or as an homme fatale. Did his starring role in the television series My Three Sons (1960–1972) ruin him as a man capable of dangerous passion? It may be part of the reason, but I am not entirely convinced. I have seen MacMurray in Borderline, a film noir in which he is paired with Claire Trevor, and I think he succeeds as a romantic lead in that film. I suspect, however, that some of the credit may be attributed to Trevor because she is fantastic in everything in which she appears. And MacMurray’s part in Borderline didn’t require lust and a lack of ethics.

(This blog post about Double Indemnity, both the novel and the film, contains spoilers.) 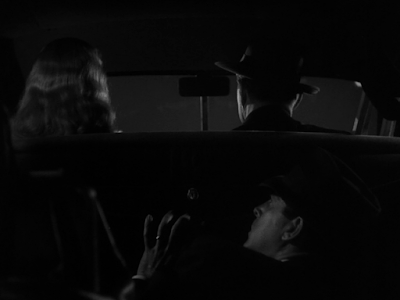 James M. Cain’s novel Double Indemnity, the story that is the basis for the film, is hard to beat for its noir characteristics, specifically its lack of redemption for all its characters. (Click here for my blog post about James M. Cain’s novel.) If I had to choose between the novel and the film (if I were stranded on a deserted ship and forced to lighten my load to avoid sinking!), I would have to pick the novel. It is pessimistic, it is bleak, it is thoroughly noir.

The ending is but one example of why I like the book more: Barton Keyes arranges an escape to Mexico via ship for Walter Huff (Walter Neff’s name in the novel), but instead Huff finds himself on board a ship that is also carrying Phyllis Nirdlinger (Phyllis Dietrichson’s name in the novel). Keyes had arranged both Phyllis’s and Walter’s ship passages; he wants to get rid of them rather than sully the name of the insurance company, his employer, by prosecuting a crime, murder, committed by one of its employees, namely, Huff. The ending isn’t stated explicitly, but Huff seems resigned to following Nirdlinger overboard into shark-infested waters because neither one of them have any other options other than the death penalty. And death by shark would be decidedly quicker than navigating the legal system.

Billy Wilder made some changes to the story in the novel because the Motion Picture Production Code, also known as the Hays code, that prevailed in the film industry at the time wouldn’t allow the subject of suicide and other topics deemed sensitive by the censors to be portrayed on-screen. (Click here for a discussion of the production code in relation to four of Wilder’s films, including Double Indemnity, at the blog site Dial M for Movies.) In the film, Barton Keyes does catch up with Walter Neff and learns that he is responsible for the murders of both Phyllis and her husband, but he is deeply disappointed because he considers Walter a friend and is rather fond of him. Keyes’s interest in Neff struck me as paternal; he takes an interest in his career path, for example, when he suggests that Neff become a claims adjustor and join his department. 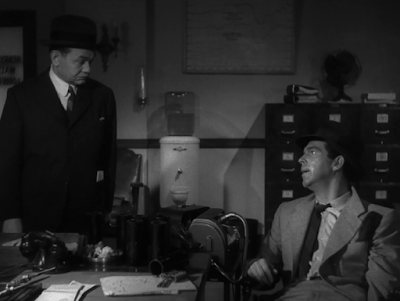 In his commentary on the DVD, film historian Richard Schickel maintains that the most important relationship in the film is not the one between Phyllis and Walter but the one between Walter and Barton Keyes. Lem Dobbs states the same in the commentary he almost shares with Nick Redman (I say “almost” because Dobbs does almost all the talking), although Dobbs feels that the relationship between the two is based on an equal footing and not a father-son dynamic. But these observations just emphasize how hard it is for me to see Fred MacMurray as a man capable of passion. His portrayal of Walter Neff just doesn’t make me believe there is any lustful passion involved. Walter Neff wants the money; he wants to prove that he can beat the insurance industry at its own game. But I’m not sure he wants Phyllis Dietrichson quite as much.

Double Indemnity has earned high praise from many, and my copy of the film on DVD from Universal Studios Home Entertainment comes with not one but two audio commentaries: one by Richard Schickel and one by film historians Lem Dobbs and Nick Redman. The seventy-fifth anniversary of the film’s release has received plenty of attention. Click here for an example from National Public Radio (NPR).

Many film noir scholars consider Double Indemnity to be the first true film noir, the first in a genre that was yet to be named when the film was released in 1944, seventy-five years ago. Film noir is a category that is very difficult to define, however, and people define it in different ways. Even trying to define a film noir period is difficult to do. Click here for a different opinion published by The Guardian: “After The Maltese Falcon: How Film Noir Took Flight.” 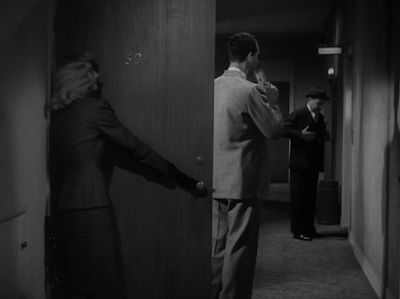 There is no doubt, however, that Double Indemnity stands up to scrutiny after seventy-five years (eighty-three years for the novel). Even after several decades, the stories in both the print and film versions are absorbing, and I think it’s because they focus on the relationships among the characters. With the novel, readers can imagine the setting anyway they want to; with the film, the out-of-date styles for just about everything—from clothes to cars, even to office furniture—are clear and obvious. Yet the story still commands attention. In his audio commentary, Richard Schickel maintains that the changes to the novel for the screenplay owe their cohesion and success mostly to Billy Wilder, that he was the one who kept the focus on the characters and especially on the relationship between Walter Neff and Barton Keyes. I have to agree, and Schickel’s points are probably some of many reasons why Double Indemnity still appeals to so many fans after seventy-five years.