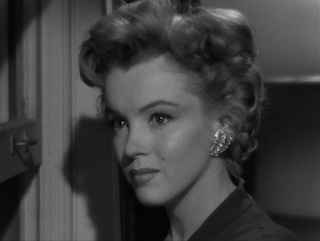 Edited by George A. Gittens
Cinematography by Lucien Ballard

This blog post about Don’t Bother to Knock is my entry for the Classic Movie Blog Association’s 2019 Spring Blogathon: Femmes/Hommes Fatale of Film Noir. Click here for the complete list of participants and links to their entries.

Marilyn Monroe might seem like an easy choice for a femme fatale. After all, Monroe’s public image is based almost entirely on sex appeal. But her performance as Nell Forbes in Don’t Bother to Knock is more nuanced, which is exactly what makes it so interesting. Nell Forbes wants to be the femme fatale, but she is a much more than an ordinary femme fatale.

Monroe’s entrance in Don’t Bother to Knock is inauspicious, even as a main character. Richard Widmark gets top billing and Monroe’s name appears under his, but neither one of them opens the film. That job is left to Anne Bancroft, who plays Richard Widmark’s girlfriend Lyn Lesley. Lyn is the McKinley Hotel’s nightclub singer, and the film opens with her talking to Joe, the bartender in the nightclub. Lyn tells Joe that she has broken it off with her boyfriend, even though he seemed to be the one. The film then cuts to Richard Widmark’s character, Jed Towers, in a sequence that reveals he is the jilted boyfriend. In his room at the McKinley Hotel, he reads Lyn’s breakup letter, and viewers see the first few lines, so they know that he is the one Lyn discussed with the bartender. When he rips the letter and drops the pieces out his window, viewers can see a woman putting the finishing touches on her evening outfit in the background, in the window across the courtyard. This is a clever shot because it is Mrs. Ruth Jones that viewers see, not Marilyn Monroe. Not yet. 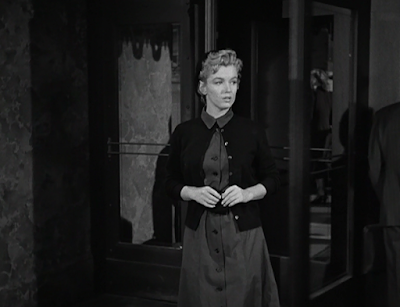 Eddie Forbes works as a bellhop in the McKinley Hotel, and viewers meet him next. He brings hotel guests down to the lobby in the elevator, and he spots someone he knows there: Only then does the film cut to Marilyn Monroe, playing Nell Forbes, Eddie’s niece, entering the hotel through its revolving front doors. Her entrance is about four and half minutes into the film. She looks around uncertainly, getting her bearings. Eddie arranged this meeting because he sees a chance to help Nell by getting her a job working as a babysitter for the hotel’s guests. Her first job is babysitting Bunny Jones while her parents attend a formal dinner in the hotel. Nell wants the job, but children do not interest her much.

After Bunny Jones goes to bed, Nell is on her own. She eats a couple of chocolate candies out of a candy box, even though Bunny offered some to her and she insisted that she doesn’t eat chocolate. She is much more interested in perusing Ruth Jones’s possessions once she is left alone in the Jones’s suite. Nell tries her perfume, then goes through her jewelry box and tries on a bracelet and a pair of earrings. Nell then goes through Ruth Jones’s closet and changes into a kimono and a pair of slippers.

Jed Towers is on the rebound after having just been rebuffed by Lyn Lesley. He wants company, and back in his hotel room, he notices Nell across the courtyard. By this time, Nell has transformed herself, forsaking her plain cloth dress for some of Ruth Jones’s finery. He attracts Nell’s attention from the window of his hotel room across the courtyard. When Nell has second thoughts about continuing their interaction, he figures out her room number from a floor plan of the hotel and calls her. Nell isn’t interested at first, but she decides that maybe Jed is worth a second chance, and she entices him from her window by signaling via the venetian blinds. Jed goes to Nell’s room looking for the promise of a good time. 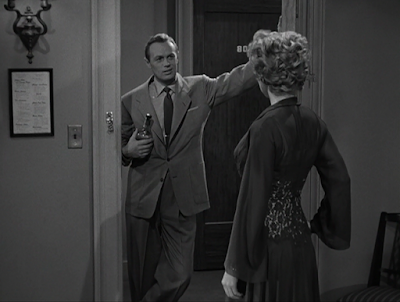 Jed Towers is a World War II veteran, and both historical and film noir convention would make him the one suffering from post-traumatic stress disorder (PTSD), but it is really Nell herself who is suffering most acutely from PTSD. It is implied that her boyfriend Philip died at least three years before the events in the film, and Nell is having trouble moving on. Jed is a veteran pilot who seems to have survived the war unscathed, although his girlfriend Lyn complains that he is perennially cynical and doesn’t want to become attached to people in general and to her in particular. It is the reason Lyn gives Jed for refusing to see him anymore. Lyn is describing someone who may be experiencing some residual effects of trauma, in her boyfriend Jed’s case, the trauma of war.

One of the hallmarks of film noir is the overwhelming feeling of angst, which can include PTSD, alienation, loneliness, grief, and so on. The narrative in Don’t Bother to Knock takes the usual storyline a step further: Jed, the wartime fighter pilot, may have a relatively mild case of PTSD, and Nell, whose boyfriend died in a plane crash in the Pacific, suffers from so much grief, depression, and alienation from her family that she has been hospitalized in the past. She reveals her state of mind in brief non sequiturs. A conversation with Jed triggers her symptoms because he is, like her boyfriend Philip was, a pilot. The memories that come flooding back during this conversation overwhelm her, as viewers see in the following conversation between Nell and Jed:
• Nell: “You’re a pilot.”
• Jed: “That’s right. Anything strange about that?”
• Nell: “Yes. That’s strange. Did you fly a bomber during the war?”
• Jed: “Who didn’t?”
• Nell: “You came home and you’d lost step. You didn’t have any plans.”
• Jed: “Well, I thought of becoming a financier. See, I was broke, so that made it a little tough—”
• Nell: “You didn’t have any profession. You said, ‘Why not do what I’ve been doing—flying?’”
• Jed: “Yeah, Something like that.”
• Nell: “‘There’s money in cargo from the States to the islands.’ You crashed . . . in the water.”
• Jed: “I’ve cracked up a couple of times, water and land—”
• Nell: “In the ocean in ’46, on the way to Hawaii. But you weren’t killed! You were only lost!”
• Jed: “Hey, wait a minute. It was in Lake Michigan. My number one caught fire and I had to—”
• Nell: “You were rescued! You came back!”
• Jed: “Well, why get so excited about it?” 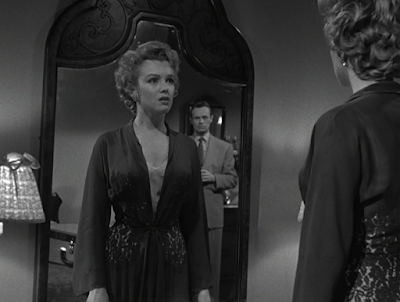 Nell and Jed flirt with one another at first. But Nell starts telling lies to hide the fact that she is really working, babysitting for a child who is supposed to be asleep in the next room, and her conversation with Jed only adds to his confusion. He wants to leave, and Nell begs him to stay. He tells her, “You bother me. I can’t figure you out. You’re silk on one side and sandpaper on the other.” When he tries to open the door to the hotel room, Jed notices the scars on Nell’s wrists. Nell describes her symptoms to Jed:
• Nell: “I did it with a razor. My father’s.”
• Jed: “You did that to yourself?”
• Nell: “When Philip was given up for lost.”
• Jed: “Your husband?”
• Nell: [shakes her head no] “I was in another hotel room, once. The night before he flew out over the ocean—the last time—he said we’d be married when he came back. I’d phone him once in a while. So you see why I want to stay. It’s so pretty here.”

Jed is in a bind. He wants to leave so he can catch Lyn at the end of her set in the hotel’s nightclub, but Nell can’t bear to part with him again: again because she is confusing Jed with her dead boyfriend Philip. When he does leave, Nell is despondent, and this is the point in the film when her problems become more serious and more evident to others, including strangers. She’s not just a liar and a thief. She is angry with Bunny for what she thinks is the child’s deliberate attempts to interfere with her pursuit of love, so she ties her up and leaves her alone on the bed. When Ruth Jones returns to the hotel suite to check on her daughter, she starts a physical fight with Nell. Nell fights back, so she’s guilty of assault and battery, too. 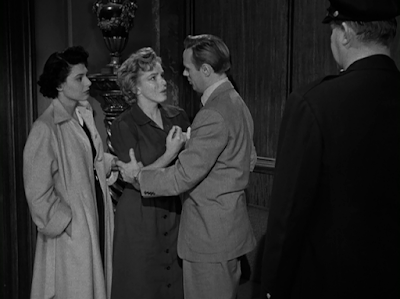 Jed is the one who comes to Nell’s aid. It seems that, from his own experiences and observations and from his brief time with Nell, he would rather give her the benefit of the doubt. He knows that she has suffered and isn’t always rational. He realizes that she finds it difficult to face the truth some of the time and that these fluctuations between reality and wishful distortion can make her unpredictable and difficult. It’s a marked change for him. With all the evidence of Nell’s wrongdoing, he is still willing to give her a chance.

This twist makes the film’s narrative rather unique and adds the element of surprise, which is something that I always enjoy in any story, in print or on film. If I have any complaint all about the film, it is about the ending. It is a little quick, a little too tidy, but that seems to be more the fault of the screenwriting than of Richard Widmark’s, Anne Bancroft’s, and, of course, Marilyn Monroe’s talents. But it is minor complaint: The screenplay was adapted from Charlotte Armstrong’s novel Mischief, which I have read. This is one instance where the changes made to the plot make the film the superior version—by far.

Marilyn Monroe plays a very complicated femme fatale in Don’t Bother to Knock. She understands that Jed Towers is attracted to her, and she uses that understanding to invite him to her hotel room. But it becomes obvious that Nell is a damaged soul who cannot find a place for herself in life and who carries despair and regret wherever she goes. Nell has many layers, and Marilyn Monroe is up to the task of showing all of those many layers and Nell’s many complications.
Posted by Marianne at 12:51 AM