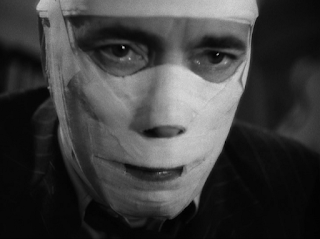 Humphrey Bogart and Lauren Bacall get star billing in Dark Passage. It is the third of four films that they made together:

◊ To Have and Have Not (1944), loosely based on the novel by Ernest Hemingway (Click here for my post about the film.)

◊ Dark Passage (1947), based on the novel by David Goodis

◊ Key Largo (1948), based on the play Key Largo by Maxwell Anderson

I haven’t yet read the book Dark Passage by David Goodis. I plan to because I want to see how it compares to the film. I imagine it’s a lot darker in theme than the film version.

Vincent Parry is a convict in Dark Passage who escapes from San Quentin in California by riding in a barrel in the bed of a pickup truck. The truck is rattling loudly, which explains why Parry can get the barrel rolling off the back of the truck without being noticed. Once the barrel is off the truck, the camera takes the first-person point of view (POV): that of Parry.

The DVD featurette claims that the first-person POV worked as well as it did in Dark Passage because of the new technology now available: the handheld camera. Shooting scenes from the first-person POV was still considered experimental in 1947, and it struck me as cumbersome when I saw Dark Passage the first time. I have come to appreciate its use in this film more on subsequent viewings. Voice-over narration from Parry, combined with dialogue when he encounters other characters, helps fill in the gaps and explain what he is thinking and planning.

Click here for more information at Wikipedia about this film and the use of first-person point of view.

Once he is out of the barrel, Parry flags down a car for a ride. The driver, a man named Baker, asks a lot of questions. An alert comes over the car radio, warning of the escaped convict. The driver realizes the identity of his passenger, but Vincent beats him, drags him out of the car, and exchanges clothes with him. He is willing to resort to violence if he deems it necessary, so viewers are already inclined to judge him negatively. 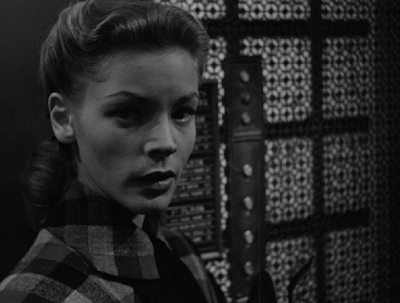 Irene Jansen happens to drive by, stop, and offer to help Vincent Parry. (She and Parry talk about their meeting later in the film, so it doesn’t seem quite so contrived as I am describing it here.) She hides him in the backseat of her car and takes him to San Francisco. They’re stopped by a police roadblock, but they don’t get caught, even though a police officer starts a search of Irene’s car. Irene cuts the search short by warning the officer not to get paint all over his clothes (she has paint supplies in the backseat). She and Vincent make it to her apartment, and she offers him a place to stay.

Click here to visit “Reel SF: San Francisco movie locations from classic films” for comparisons (then and now) of Irene Jansen’s apartment located at 1360 Montgomery Street in Telegraph Hill. This site offers “then and now” shots of locations from several films noir.

Irene is following, and has been following, Vincent’s case because it reminds her of her father’s. Calvin Jansen was convicted of killing his wife. He was a wealthy architect, but he died in San Quentin Prison. Irene doesn’t believe that her father killed her stepmother, and she thinks that Vincent might be innocent, too. 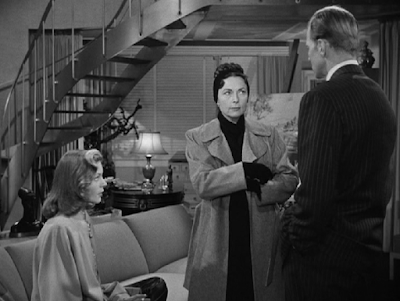 Madge Rapf knocks on Irene’s front door. She knows both Irene and Vincent, and she is frightened about Vincent’s escape from San Quentin. She worked against Vincent at his murder trial, in which he was tried for the murder of his wife Gert. Bob, another visitor, and Irene convince Madge to leave. Irene is relieved to see her and Bob go because she is hiding a fugitive and, of course, doesn’t want anyone knowing that Vincent is staying with her.

Vincent Parry decides to leave Irene’s apartment the first night of his prison escape. He takes a cab with a chatty cab driver who recognizes him. (The first-person point of view is abandoned while Vincent is in the cab, but he is in almost complete shadow sitting in the backseat, and his face is obscured almost entirely.) The cab driver offers to stop so they can talk. Like Irene, he doesn’t believe that Vincent is guilty of killing his wife. The cab driver offers Vincent an idea: Let his friend, Dr. Walter Coley, perform plastic surgery to change his appearance.

It struck me as a bit odd that two strangers, Irene Jansen and Sam the cab driver, were so willing to help Vincent Parry. Irene’s reasoning is stronger than Sam’s. She draws parallels between Vincent’s case and her father’s. Both she and Sam talk about the trial and the publicity surrounding it, but viewers never see anything of the trial or its news coverage. They have only Irene’s and Sam’s descriptions to go by. But Vincent’s luck does run out, as anyone might expect in film noir. Irene and Sam may be the only two people (of three; the third is a friend of Parry’s) who believe Vincent is innocent, and he happens to run into both of them early in his prison escape. It isn’t long, however, before fate turns against Vincent.

Vincent Parry first goes to a friend’s, George Fellsinger’s, apartment. He asks George, a trumpet player, if he can stay with him while he recovers from the plastic surgery. George worries that the police will come to his apartment looking for Vincent because they already know that they are friends, but George finally agrees. They talk about Madge framing Vincent for the murder of his wife Gert because she couldn’t have him for herself, and Humphrey Bogart delivers one of my favorite lines from this film: “Maybe someday she’ll get run over or something.” This line and this conversation between Vincent and his friend George may be the strongest direct evidence that viewers have about Parry’s innocence. 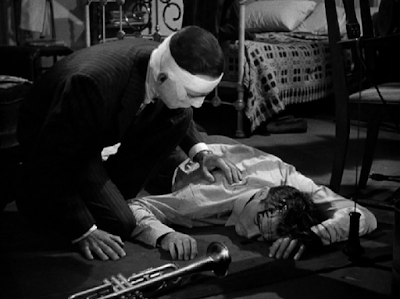 After Vincent has the plastic surgery, he returns to George’s apartment to recuperate. When he arrives, he finds George dead. Vincent has no choice but to return to Irene’s apartment. He needs help with his recovery, and he has nowhere else to go. Irene is happy to help, and they develop a friendship as Vincent improves. When it is time to remove the bandages, Irene is there to assist. Once the bandages are removed, the use of the camera to shoot first-person POV from Vincent Parry’s perspective comes to an end.

Vincent decides to leave Irene’s after his recovery. Once Vincent is on his own, everything seems to conspire against him—again. Baker, the driver who gave Vincent a ride at the start of the film, comes back into his life, and he’s not back to be helpful. When Vincent confronts Madge, she has the bad luck to fall to her death in an accident. The wish that Vincent expressed to his friend George has come true. But it’s even worse luck for Vincent. Who would believe a convicted murderer that he just happened to be in the wrong place at the wrong time, the same moment Madge breaks through her own apartment window and falls several floors to her death? Even the real reason for his visit to Madge is a bit hard to believe. Why would he or anyone else believe that she would be willing to defend him after she falsely accused him of murder? 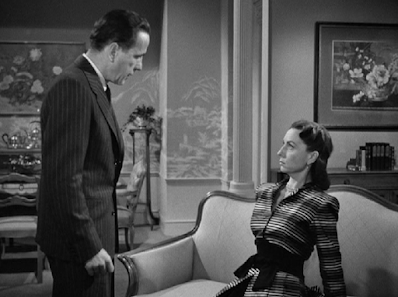 But no one, in 1947 and probably now, sees a Bogart and Bacall film expecting more than their onscreen performances and star power. Madge Rapf does exactly what anyone besides Vincent Parry would expect her to do. Vincent Parry’s bad luck just gets worse and worse. The ending is a little quick and bit too neat, but it’s probably the one everyone is rooting for in a Bogart and Bacall film. Their onscreen personas may really be box office magic after all, even after more than seventy years.