The Strange Affair of Uncle Harry (1945) 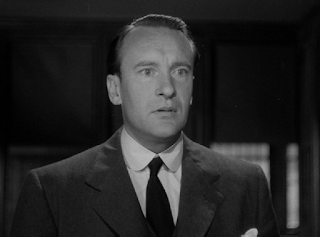 The Strange Affair of Uncle Harry lives up to its name: It is a strange little film—and I mean that in a good way! Even its ending is bit odd, and I give nothing away here by describing it. The ending starts off like so many other film endings. The screen shows the same art deco background that was behind the opening credits, with type that one would expect, especially in a classic film from 1946:
THE END
A Universal Release
Then the following type appears over that:
In order that your friends
may enjoy this picture,
please do not disclose
the ending.
So you won’t find any spoilers in this blog post. Plot surprises are part of the fun of watching films, and I can’t ignore a request like this one at the end of The Strange Affair of Uncle Harry because almost all the twists and turns took me by surprise.

Other films that warn viewers about spoilers are Les diaboliques (1955) and, I believe, Hitchcock’s Psycho (1960). If you know of more films or can confirm my belief about Psycho, please leave a comment.

The Strange Affair of Uncle Harry starts with a long shot of a town in the distance, and a voice-over narrator tells viewers that they’re looking at Corinth, a small town in New England. He’s from the town, but viewers have no idea who he is and he never identifies himself. He does say this: “The folks that live here, well, we’re people like yourselves.” He shows off the statue of General Melville Quincey in the town square and then describes how the Quinceys lost most of their money in the Great Depression. Then he talks about the Warren Mill and adds this: “Harry Quincey worked there, day in, day out.” And then viewers are left on their own, so to speak.

I guess viewers can assume that the narrator is probably not Harry Quincey, although in a film like this one, we can never be too sure. The narrator uses the past tense: Is this an older Harry Quincey telling his story? I guess the only thing we can be sure of is that the story is already in the past, already being told around town.

John Warren is the owner of the Warren Mill, but his purpose seems only to be romantic competition for Harry Quincey. Harry is a bachelor who lives with his sisters Hester and Lettie, and he supports them with his work designing fabrics for the mill. He is working at his desk when he is interrupted by Annie. She has come to tell him that she is engaged to be married, which makes him feel old and left out. Right after she leaves his office, Deborah Brown, the new designer from New York City, arrives with John Warren and seemingly with a plan to solve Harry’s problem. Deborah takes a liking to Harry immediately. She wants to hear about his work and she enjoys his sense of humor. 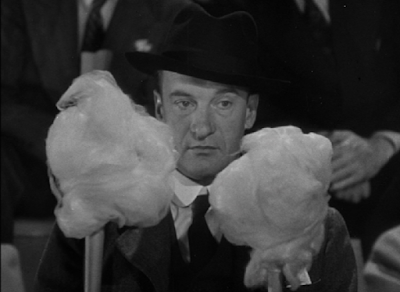 In the next scene, Deborah and Harry are on a date at a women’s league softball game. John Warren is there, and he calls Deborah to join him and his daughter Joan in their front row seats. Harry goes down to the front row seats with Deborah, but there isn’t enough room for him, and he is forced to sit one row behind, holding onto his and Deborah’s cotton candy. The shot of his face between the two fluffs of cotton candy is a successful bit of comic relief; it is also a way to show that Harry isn’t the one who will instigate much of the action.

John Warren and his mill can’t stand in Deborah’s way, however. John Warren takes Deborah home after the softball game, but his daughter Joan is in the front seat with them and—even more important—Harry is in the backseat. Harry gets out of the car with Deborah in front of her hotel, so he gets the alone time with her. She wants to stargaze, and he invites her to his renovated carriage house behind the family home to use the telescope that he built himself. 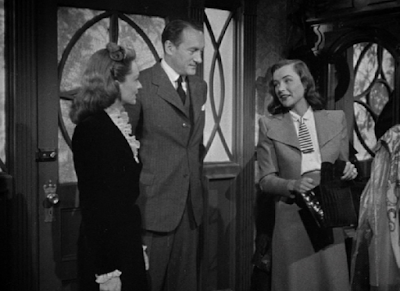 Hester, Harry’s sister, sees them from the house, and she is just thrilled that Harry has a date. When she runs to Lettie’s room to tell her, Lettie seems a bit edgy about the news. After a few months, during which Lettie has the chance to sharpen her line of attack, Deborah comes to the Quincey house for the first time to meet the sisters. Lettie has some pointed advice for her:
• Lettie: “We feel we know what’s best for Harry. Deborah, I hope you won’t misunderstand if I, if I give you a little advice.”
• Deborah: “I shan’t misunderstand, Lettie.”
• Lettie: “We Quinceys have lived a great many years in Corinth. And our name is rather well known here. It’s ridiculous, of course, but, but there it is. So we have to be rather careful how we conduct ourselves. If you know what a small town is.”
• Deborah: “Yes, I do. I picked one to be born in.”
• Lettie: “Well, then. Now, please don’t think I intend anything personal by this. People here are set in their ways, ordinary minded. And a newcomer among us needs to be especially careful. Now, don’t think that this is my point of view, but people do talk. And if, for instance, Harry were to be observed leaving your hotel late at night, it might be misinterpreted. Mightn’t it?”
• Deborah: “Yes. I suppose it might.”
• Lettie: “Well, then, that’s settled. I’m so glad we had this little talk. You’re such a sensible girl. I’m sure we’re going to be very good friends now that we understand each other.”
• Deborah: “We understand each other. But if Harry wishes to stop by my hotel at any time, I’ll always be glad to see him.”
Deborah sees right through Lettie and Lettie’s barely concealed desire to exclude her. Lettie does care about her family name and even more so about her brother. She is the femme fatale in The Strange Affair of Uncle Harry and she may not be ordinary minded, but she is set in her ways and she is very possessive of her brother.

Deborah and Harry work around romantic obstacles and agree to marry. Harry arrives home and announces his engagement. Lettie and Hester will move out of the family home so that Harry and Deborah can move in. Lettie doesn’t object outright, but she starts her own campaign of stonewalling that eventually wears out Deborah’s patience. When Lettie gets sick at church one Sunday, she’s taken away in an ambulance. Deborah and Harry were to leave for New York City to be married that night. Deborah gives Harry an ultimatum: Choose between her and Lettie. Harry can’t leave Lettie behind when she might be seriously ill, or that’s what he is afraid of. He seems to be the only one who cannot see that Lettie has been faking her various illnesses for years. 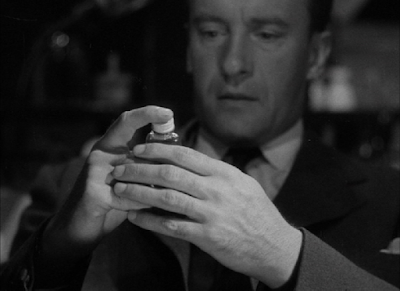 After Deborah’s departure, Harry finds a bottle of poison in a desk drawer in the living room and learns that Lettie bought it when they thought their dog would have to be put down. Harry sneaks it into his pocket and takes it with him to the carriage house. He sits in a chair and holds the bottle of poison in front of him. In a wonderful shot, the camera moves in on the bottle as Harry contemplates what to do with it. Lettie shows up outside the carriage house, and Harry, standing now at his telescope, invites her inside to join him. She gladly accepts. Their conversation in the carriage house is chilling:
• Harry: “You know, Lettie, when you look up at the stars, you feel awfully small. Our problems seem so petty against all that space on space out there. We are mere drops of nothing compared to a sun with a hundred million miles for a backyard. So why do we torture ourselves trying to discover what’s good and what’s evil? What’s right and what’s wrong? So unimportant.”
• Lettie: “Yes, Harry. We understand each other.”
• Harry: “Yes, we do. . . .” 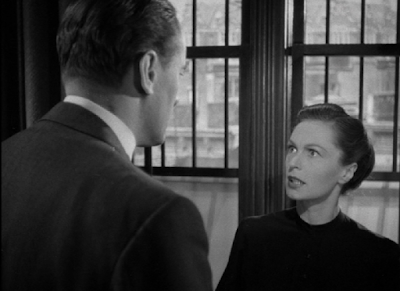 One surprise after another follows this point in the film. The Strange Affair of Uncle Harry is barely eighty minutes long, but it manages to incorporate all sorts of themes about domestic happiness and the lack of ordinariness in an ordinary small town. The back of the DVD cover from Olive Films calls it a film noir; Wikipedia calls it a film noir drama. I wasn’t so sure that it was film noir the first time that I saw it, but I could really appreciate the film’s dark moments on second viewing. From what I have read, the play on which it is based, Uncle Harry, is bleak compared to the film. Several details of the play were apparently changed so that the film version of the story would satisfy the Motion Picture Production Code. I haven’t read the play, and maybe it is more noir than the film.

But there’s no doubt that The Strange Affair of Uncle Harry is a fun noir with some really dark moments. George Sanders is fantastic in the role of Harry Quincey. He captures all the nuances of Harry’s romantic dilemmas and desperation. Ella Raines does the same with her character, Deborah Brown. But Geraldine Fitzgerald really shines in the role of Lettie. Lettie is not a typical femme fatale, but The Strange Affair of Uncle Harry is not a typical film noir. Lettie uses illness, not sex, to manipulate her brother into giving her what she wants. And she certainly knows all the tricks of manipulation. The film showcases what she is capable of.
Posted by Marianne at 4:08 PM