Lloyd Nolan Is Michael Shayne: The Detective Who Always Solves His Cases and Has the Most Fun of Anyone Doing It

The members of the Classic Movie Blog Association (CMBA) have been asked to recommend five classic (and some maybe not quite classic) films that are sure to give some comfort to movie lovers in these difficult times. And there’s nothing like a Michael Shayne film starring Lloyd Nolan to provide some comfort and distraction when you—when all of us—are trying to get through the COVID-19 pandemic. 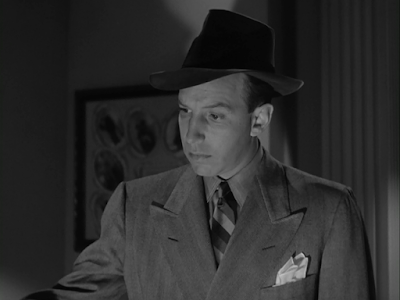 Michael Shayne is an ordinary guy just trying to make a living as a private investigator; he’s just not always that good at hanging on to his money or following through on his engagements. (He has as much luck getting married as he has keeping his money.) He keeps his ethical code pretty rock solid; he’s been known to break a rule here and there but only for the greater good. He always solves his cases, and he has the most fun of anybody doing it.

My top five Lloyd Nolan–as–Michael Shayne film picks are presented here, in the order that they were released to movie theaters, which I believe is also the order in which I saw them. Each film title is also a link that will take you to my original blog post about the film. 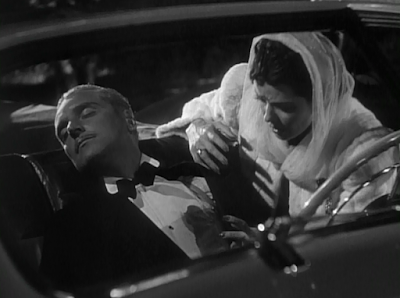 Michael Shayne, Private Detective (1940)
Michael Shayne, Private Detective mixes murder, mystery, humor—and a little ketchup. And Michael Shayne isn’t the only one enjoying himself. For example, one of the characters, Aunt Olivia Brighton, takes it upon herself to help solve Harry Grange’s murder, which she read about in the newspaper. She and the Brightons’ butler Ponsby are starting a file on the case.
• Aunt Olivia: [to Detective Shayne] “Here I’ve been, solving other people’s murders all my life, and now that I have one so close to home, why, it’s just wonderful. Ponsby and I have started working on the case, but we haven’t any decent clues, have we Ponsby?”
• Ponsby: “Only the fact that Mr. Grange died in a sea of tomato ketchup.”
The film explains why tomato ketchup could be relevant at all in a murder. 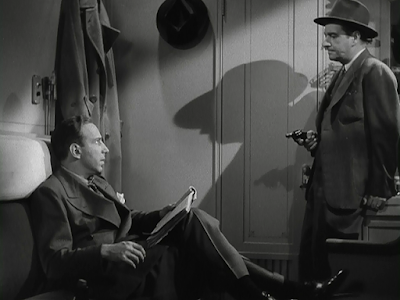 Sleepers West (1941)
Sleepers West packs a lot of information in its short running time of seventy-four minutes. I had to see the film twice before I was sure how and why Callahan and Caleb Wentworth are connected, and how Caleb Wentworth is connected to the case for which Helen Carlson would be testifying. I enjoyed Sleepers West so much both times that I should see it again, just to make sure I didn’t miss anything else! You can be sure, however, that Michael Shayne misses nothing. 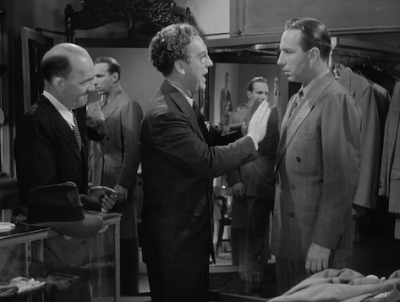 Dressed to Kill (1941)
The film starts with Michael Shayne (“private investigator to you”) in a clothing shop looking to buy a suit for his upcoming marriage to Joanne La Marr. Smiley Joe Bishop is the proprietor. In walks Shayne and Bishop says:
• Bishop: “Well, well, well. If it isn’t my old friend, the private dick.”
• Shayne: “Private investigator to you.”
• Bishop: “Mike, you’re looking fine. Wonderful. If you looked any better, you’d have to be twins. Glad to see you, boy. Getting everything you want?”
• Shayne: “Well, I was just—”
• Bishop: “It’s a beautiful thing, a beautiful thing. You’re sure dressed to kill. [to the store’s salesperson] Uh, say, isn’t this the suit I told you to put away for another customer? You can’t sell that suit. [Shayne starts to take off the suit jacket; to Shayne] Well, all right. So I’ll lose another customer. You’re worth it, Mike. You’re worth it. Mmm, does it fit? Like a glove.”
• Shayne: “It should fit like a suit.”
And did I mention there’s a murder mystery for Shayne to solve in Dressed to Kill, too? 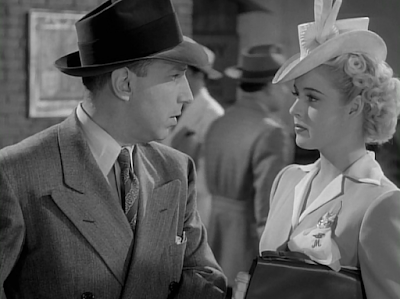 Blue, White and Perfect (1942)
The expression “blue, white and perfect” may be helpful to Shayne’s investigation into international diamond smuggling, but it doesn’t describe the state of his romance with his girlfriend Merle Garland. By the end of the film, Merle is angry with him—although she does have a couple of good reasons. When the case is closed, Shayne tells Merle that they should get married. She agrees, but when she opens her closet door to pack, a dead body, with its ankles tied and a knife in its back, falls out. Shayne is off on his next case, and he leaves Merle behind: She has fainted and she has been jilted again. Superman, I mean, George Reeves, has a fairly big role in this one, by the way. 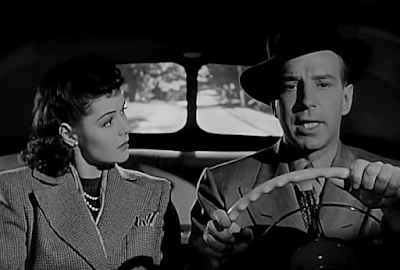 The Man Who Wouldn’t Die (1942)
The Man Who Wouldn’t Die is a spoof of horror movies. And all the elements of a horror movie work pretty well in murder mystery, too:
◊ Dark and stormy night
◊ Thunderstorms with lightening
◊ A large dark mansion
◊ A ghost with a gun and glowing eyeballs
◊ A character conducting electricity experiments in the basement laboratory of the large dark mansion
◊ A sinister contraption in the basement laboratory that looks like an electric chair
And someone’s dead body keeps appearing and disappearing. Until Detective Michael Shayne gets involved, that is.

Bonus: There are actually twelve Michael Shayne films: seven starring Lloyd Nolan when the films were produced by Twentieth Century Fox, and five starring Hugh Beaumont when they were produced by Producers Releasing Corporation (PRC). I haven’t yet seen the last two Nolan versions or any of the Beaumont versions, but I’m guessing that the Beaumont versions are more noir in tone. Here’s a handy list:

This blog post is my contribution to the CMBA 2020 Spring Blogathon: Classics for Comfort. Click here to see the entire range of suggestions from CMBA members. The list will be updated with live links each day of the blogathon, from May 19 to May 22.
Posted by Marianne at 12:04 PM