To celebrate National Classic Movie Day on May 16, Rick at Classic Film & TV Café is hosting the Four Favorite Noirs Blogathon. What a great idea! My only qualm: How am I going to pick only four!

I managed to whittle my list down, as requested, but it was tough. And I cheated a little by including a neo-noir. I decided to write about four little-known noirs because I think they deserve to be seen at least once. If you want to see them again and again, like I do, so much the better!

Born to Kill is a gritty look at two people who are a match made in hell. Sam Wild (Lawrence Tierney) and Helen Brent (Claire Trevor) are attracted to one another for all the wrong reasons. Both of them are turned on by violence and death, and their story doesn’t end well for either one of them (but you already know that because this film noir). Born to Kill is a perfect example of a noir that shows you what you shouldn’t be doing if you want to avoid the dreadful consequences of a life of crime—that is, in case you are toying with the idea of a life of crime! Tierney and Trevor are fantastic in their lead roles. And many of the supporting actors, some of the great character actors of film noir—Walter Slezak, Elisha Cook Jr., Esther Howard—are, too.

I watched Born to Kill on DVD, with commentary by noir expert Eddie Muller. Muller’s commentary is packed with information about the film, the director, and the actors. In fact, the commentary includes some recorded material from director Robert Wise, and Muller recounts some of his personal experiences meeting Lawrence Tierney, which adds to the fun. RKO produced Born to Kill as an A picture, a vehicle to make Tierney a leading man and star. But Tierney’s own proclivities toward violence off-screen helped sabotage that plan. If you watch Born to Kill on DVD, I highly recommend Muller’s commentary, too. 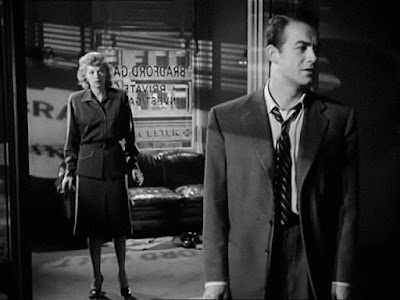 • Brad Galt: “There goes my last lead. I feel all dead inside. I’m backed up in a dark corner, and I don’t know who’s hitting me.”

The Dark Corner is one of those films I can watch again and again and never tire of it. The witty dialogue is one of the things I like best about the film. The repartee between Kathleen Stuart (Lucille Ball) and Brad Galt (Mark Stevens) is so much fun. And their on-screen chemistry works, too, which is amazing when you consider that Lucille Ball was going through a rough patch in her marriage to Desi Arnaz and that she hated working on this film. Somehow Lucille Ball and her costars make it work, and I found myself rooting for Kathleen and Brad to succeed every step of the way.

Lucille Ball is given top billing, but her costar, Mark Stevens is fourth in the list. Two great noir actors come second and third: Clifton Webb (who plays Hardy Cathcart) and William Bendix (who plays White Suit). Their performances add so much to a great film. Clifton Webb has some dry lines and observations that add an appropriately cynical touch, and he can exude menace when he needs to. William Bendix is the hired thug who knows what he’s doing—until he is outwitted, that is, by . . . well, no spoilers this time because this is a good one. 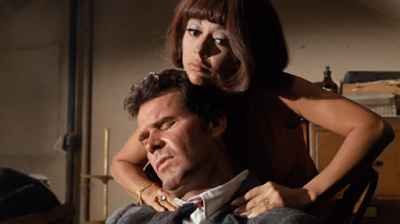 Forget about Humphrey Bogart! Forget about Dick Powell! Don’t get me wrong: I happen to like both of them as Philip Marlowe, but Marlowe has James Garner. And he gives one of the best portrayals of Philip Marlowe. Yes, he is that Philip Marlowe, Raymond Chandler’s famous detective. Another huge plus is Rita Moreno, who costars as Dolores Gonzáles. Moreno, in addition to having a well-deserved “moment” in 2022, is fantastic in Marlowe. Is Gonzáles really a good friend to Mavis Wald, or is she the femme fatale in this story? She keeps everyone, including Marlowe, guessing.

The film is adapted by Stirling Sillphant from Chandler’s novel The Little Sister. The film takes place in 1969, but the story is updated to fit the times while managing to stay true to the novel. For instance, the film opens with Marlowe driving up to a ramshackle beach hotel called The Infinite Pad. People in hippie-style clothing lounge about on the front stairs and porch. And Marlowe shows up in his suit jacket and tie, trying to find the lost brother of his client, one Orfamay Quest. Philip Marlowe is a throwback to the past, a relic of pulp novels from the 1930s and 1940s, but Silliphant’s screenplay and James Garner’s portrayal make Philip Marlowe relevant still in 1969 and so much fun to watch in 2022. 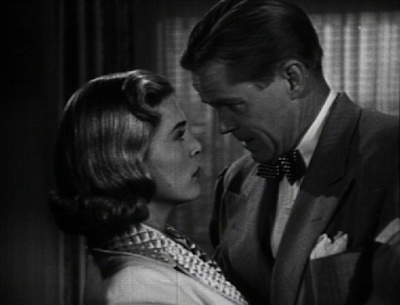 In France, Too Late for Tears is called La tigresse, the perfect name for Lizabeth Scott’s character Jane Palmer. It’s the French translation of Danny Fuller’s (Dan Duryea) nickname for Jane. The minute Jane gets behind the wheel of the car at the start of the film, orders her husband Alan to get in, and drives off with a bag of stolen money thrown into their backseat, you know you are in the noir universe. Jane wants her slice of the American dream, and she doesn’t care who she has to cut out of the picture to get it. Only one man can match her scheme for scheme.

Too Late for Tears holds a special place in my heart because I could swear that I saw it as a child on television. It was Don DeFore who made me wonder. If you are used to seeing him in the television sitcom Hazel or other film comedies, you’re in for a real treat. His performance as Don Blake is certainly memorable. And that’s quite an achievement in a film with two noir greats in Lizabeth Scott and Dan Duryea.

This article about Born to Kill, The Dark Corner, Marlowe, and Too Late for Tears is my entry for the Four Favorite Noirs Blogathon, which is presented by Rick at Classic Film & TV Café to celebrate National Classic Movie Day on May 16. Click here for the complete list of blogathon participants and links to their blogs. The list will be updated throughout the day.
Posted by Marianne at 7:17 PM