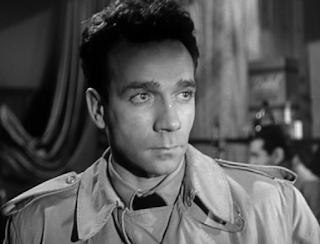 Several details about Gunman in the Streets intrigued me when I first heard of the film. First was Dane Clark in the starring role of Eddy Roback. Dane Clark has become another one of my film noir favorites, so it is always a plus for me when I hear he is in a film. Another was the fact that Gunman in the Streets was never released for theatrical showing in the United States. The film was shot in Paris, France, and the first time that U.S. citizens had a chance to see the film (if they didn’t visit Paris, Britain, or Canada in 1950, that is) was on television in the 1960s, when the film was syndicated. On U.S. television, the film went by the title Time Running Out.

I saw Gunman in the Streets on DVD, which I found in my local library system. The film is also available for free online. Click here to see it at the Internet Archive.

◊ Time Running Out (U.S. television syndication in the 1960s)

The opening credits appear over still shots of street scenes in Paris and some recognizable landmarks, including the Eiffel Tower, l’Arc de Triomphe, and the Seine River. Then a woman picks up a copy of a newspaper with the following headline: “Eddy Roback Faces Paris Court Today” and then “Gangster’s Trial Starts After Ten Months Investigation.” A passerby with a sandwich board advertisement ambles past. The camera then focuses on an unmarked police van driving by the newsstand on the street.

The film then cuts to the storefront of a liquor store as seen from the street, then to the interior of the store looking out onto the same street. The man with the sandwich board peers into the window; he sees in the reflection a car stopping the police van. The camera is still inside the store when a gunman gets out of the car and opens fire on the van. Other men and police officers start a shootout with a barrage of gunfire. Bullets smash the store window and the bottles of liquor on the shelf inside the window. After a few moments of quiet, the film explodes, almost literally, with violence and action. 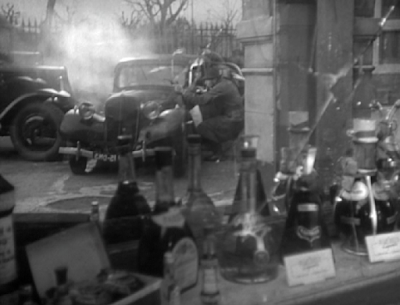 People run for cover. Bystanders are killed, as is one of the drivers of the van. A police officer arrives and calls for help via a police call box. Eddy Roback escapes in the mêlée. From a police broadcast, viewers learn that he is a deserter from the U.S. army. Before being caught by the police, he had been making his living by staging brazen robberies and participating in the postwar black market. He had been captured in 1949, but he has now escaped. A police manhunt for Roback begins after this spectacular opening sequence.

Roback hides out in a department store, Les Magasins réunis. He escapes from police officers hunting for him in the store by pretending to be the father of a boy he picks up when the mother is distracted. Eventually Eddy makes it to a hiding spot in the street outside the apartment where members of his gang are expecting him. The police arrive instead, and Eddy’s gang members are arrested. Eddy Roback is running out of options to escape. 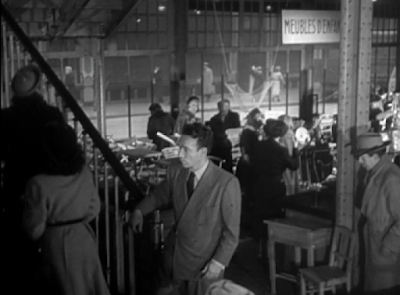 The police discover the identities of four women that Roback might contact, and different groups of officers check on them all. Commissioner Dufresne visits one of them, Denise Vernon, himself. He calls her “the favorite girlfriend,” but this is in reference to Eddy Roback, not himself. He seems to know who she is already, and she recognizes him, too. Her apartment is luxurious, especially for postwar Paris. The implication is that she is earning her keep by dating men with money and that she doesn’t care how they earn it or get it.

Denise Vernon is planning to meet Frank Clinton, a journalist, at a restaurant called Chez Bertrand. She is followed, of course, by the police, but she leaves the restaurant by the kitchen exit in the back. She takes a cab to meet Eddy Roback at another restaurant, Chez Pitin, which is owned by someone they both know. Eddy and Denise ride around Paris in the cab trying to come up with ideas about how Eddy can get his arm treated (he was hit in the arm by a bullet in the shootout) and how he can find 300,000 francs. Eddy needs the money to go to Toufflers, France; meet someone named Leon; and escape over the border into Belgium. Denise doesn’t have the money, but she promises to get it for Eddy. But then she returns to Chez Bertrand, where Frank Clinton is still waiting for her patiently. Frank might just might be useful to her after all. 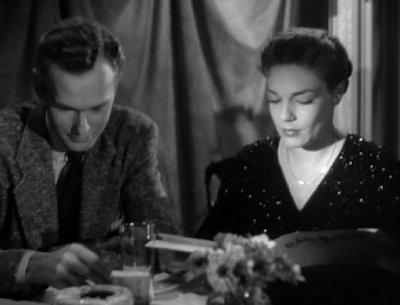 You might think that I have given away almost everything there is to know about the plot, but there are still plenty of surprises left in the story for first-time viewers. The film surprised me more often than not, and I always enjoy that in a film or novel. One example is the level of violence depicted in the film. Eddy Roback is a violent criminal, and he is given the chance to show how far he is willing to go. But he does have an ego, and he can be manipulated. For instance, he is more than willing to let Frank Clinton escape without harm because Frank plans to write at least one article about Eddy and his daring flight out of the city during a police manhunt.

Any film is a look into the time period during which it was filmed, and Gunman in the Streets is no exception. The story in the film is fictional, but it was shot on location, and I found myself taking in a lot of background detail while following the narrative. I enjoyed the film’s particular view of life in postwar Paris. Paris itself looks relatively unscathed considering the war in Europe ended only five years prior to the release of Gunman in the Streets. The shots of Eddy Roback trying to escape in the store, Les Magasins réunis, tell a slightly different story, however. The merchandise is crowded into the store, which has no shelves and few counters. In contrast, Denise Vernon’s apartment is luxurious for any period, but especially so in 1950 Paris. It is obvious that she gets her money, and a lot of it, from dubious means. One of them is dating a rich criminal like Eddy Roback, someone who knows how to work the postwar black market to his own advantage, someone who would be wanted by the police and be the perfect subject for a film noir. 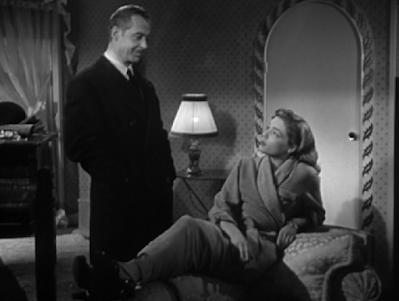 I can understand why the film wasn’t given a theatrical release in the United States in 1950. Eddy Roback, the main character, is a U.S. army deserter. Gunman in the Streets was released soon after the end of World War II in 1945, and the main character is a serviceman gone rogue. He is not only a military deserter; he is also a criminal, a participant in the postwar black market.

And maybe the frank discussions about the downsides of relationships had something to do with it, too. Denise Vernon and Frank Clinton talk about their feelings: he toward her and she toward Eddy Roback. They have trouble explaining why they feel the way that they do, but they have no trouble doing whatever they can to help the people they love. In both Denise’s and Frank’s cases, they are willing to break the law. I thought their honesty with one another (Denise and Frank, that is) helped to create a lot of sympathy for both characters, but that probably wasn’t enough for postwar Hollywood and the United States in general in 1950.

Coming in December: You Knew My Name: The Bond Not Bond Blogathon