Film noir is a fluid category, perhaps more so than most film categories. Key Witness is one of those films that is mostly a film noir, but it does have elements that are not particularly noir. The main character, Milton Higby, is a dreamer, a man who likes to invent novelties. He reminded me of Walter Mitty in James Thurber’s short story “The Secret Life of Walter Mitty,” except that Higby can turn his ideas into profitable items for sale. Higby eventually transforms himself, too: into someone who can misrepresent himself and impersonate someone he has never met. 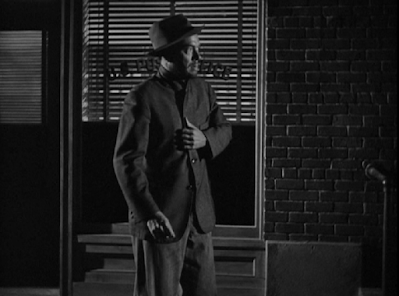 On-screen type informs viewers that the location is Warset, Arizona. A disheveled man ducks into a post office and uses an Order to Change Address form to write a note: “You’ll find the body of Milton Higby on the R.R. tracks five miles east of town.” He drops this note in a mail slot, returns to the sidewalk outside the post office, and runs in front of a car (this accident is off-screen). He is hit by the car, but he survives with only a slight concussion. In the hospital, he is identified as Arnold Ballin because he is carrying a birth certificate with that name on it; he is also carrying a lot of money and a locket with pictures of a woman and an infant. An extended flashback helps to explain how Higby ended up in the hospital.

In the flashback, Milton Higby works for a company called Builders, Inc. Milton is a drafter, as is his friend Larry Summers, who sits at the next worktable. Larry suggests that Milton join him for a night out. Larry is portrayed as a ladies’ man with questionable hobbies, and he has a date with a woman whose friend needs a date. Milton is sure that his wife Martha would not approve, and Larry wonders out loud why Milton has to tell his wife everything.

Milton Higby comes home to his wife Martha. They argue, and she tells him, “You don’t have the backbone of a jellyfish.” During their argument, his talking clock, one of Milton’s inventions, springs into action on the hour. A puppet pops out and recites a rhyme in a human voice. Milton and Martha make up after their argument, but Martha explains why she was so cross: “I can’t help it. I know—I know I sound like a fishwife sometimes, but it’s just because I worry so much. We don’t seem to be getting ahead at all. We’re just marking time. And then you make matters worse. When I pick on you, you won’t even fight back.” 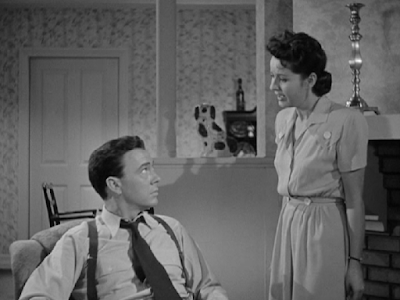 Martha’s explanation is an example of societal disillusion after World War II. The end of the war promised the American dream and prosperity amid the postwar recovery, but many were unhappy with the lack of economic progress. The United States was victorious in the war, and the country was now a world leader, riding high on an impressive international reputation, but many at the time felt that they were left out of the American dream. Martha seems to be one of those people. Milton suggests to Martha that she take a vacation to visit her aunt, and she readily agrees.

Back at Builders, Inc., Larry suggests that Milton join him for an afternoon at the racetrack. Milton reluctantly agrees and accidentally buys ten tickets (for $20.00) instead of one ticket (for $2.00). When he tries to demand his change, a security guard throws him off the premises. Later, Larry shows up at Milton’s home with Sally Guthrie and Marge Andrews. Sally is very impressed with all the gadgets that Milton has invented, including the talking clock and a light switch that shows a boy and a girl kissing when it is turned on. (Both gadgets will be key pieces of evidence that bring Milton back to his former life.) Larry learns that Milton has won the daily double at the racetrack, which is worth a fortune, and is now a rich man. Fate starts out kind but turns nightmarish, in keeping with the noir elements of this film. 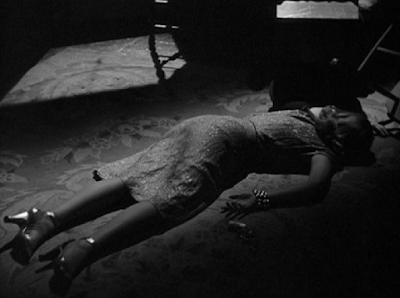 Milton shows up drunk at Sally’s apartment with gifts for her, Larry, and Marge. They all have plans to go out, but Milton is too drunk and passes out. Sally suggests that she stay home with him, and she and Milton can meet Larry and Marge later. After Larry and Marge leave, Sally’s ex-husband Jim shows up uninvited. Sally and Jim get into an argument, and Sally is shot dead with her own gun. Milton wakes up to find Sally’s dead body on her living room floor, and he leaves by the fire escape before anyone can find him in Sally’s apartment. He goes home to leave a note for Martha because he has decided to become a drifter and travel around the country.

Milton has to stay one step ahead of the law. He has only one friend on the road: a fellow hobo named Smiley. At one point, they find a dead body on the railroad tracks. Smiley doesn’t want to get involved, but Milton stays behind to see what he can do. Instead of contacting anyone for help, he decides to exchange identities with the body. He takes the man’s birth certificate, locket, and money.

Milton’s flashback ends at this point, and the film cuts back to him at the hospital. He has a visitor: Albert Loring, lawyer for John Ballin, Arnold Ballin’s father. Loring can’t convince Milton to return to a home that wasn’t his to begin with, but then John Ballin himself shows up and convinces him to come home. They eventually discuss Milton’s love for inventing novelty items, and his father sets him up in business. Milton “reinvents” his talking clock and his electric light switch plate.

In the meantime, Larry Summers and Marge Andrews are now engaged, and when she arrives at his door, she has something to show Larry: an electric light switch plate exactly like the one that Milton had in his home with Martha. Larry is suspicious and thinks that the Ballin Manufacturing Company, the name on the back of the box for the electric light switch, has stolen Milton’s ideas. He and Marge decide to spend their honeymoon visiting the Ballin Manufacturing Company. Larry becomes the film’s amateur private detective because he thinks Martha Higby, Milton’s widow, should get some compensation for Milton’s ideas. 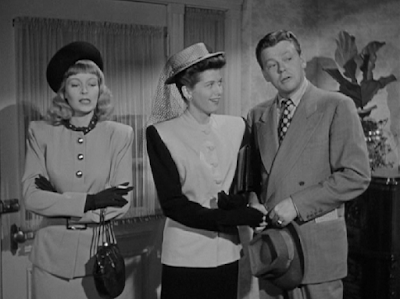 One of the things that I really like about Key Witness is the way that it presents Larry Summers, Marge Andrews, and Sally Guthrie as questionable characters, the people who could lead Milton Higby down a rabbit hole of bad luck and fateful errors. But Milton goes down the rabbit hole because of his own decisions. And after his three friends are introduced into his life as possibilities for trouble and ruin, they become his truest friends. They want to help him and his wife Martha, and Larry’s investigative work leads to finding Milton and financial reward for everyone.

The title is appropriate for the film because one of the characters in the film is the key witness in Milton’s life story. Another plus is the story pace. An awful lot is packed into this film, which is barely sixty-seven minutes long, but it doesn’t feel rushed. Except for the ending, that is. The ending of Key Witness almost took my breath away—and not in a good way. It doesn’t match the rest of the film at all and definitely felt tacked on. In less than five minutes of film time, Milton is cleared of murder just before he is about to be executed, Milton and Martha Higby are reunited, John Ballin forgives Milton and keeps him on as an inventor, Larry Summers is now an employee of Ballin’s company, and Smiley seems to have taken on the new role of the voice for Milton Higby’s famed talking clocks. The very last shot is of Smiley popping his head through a paper clockface and reciting one of Milton’s poems. It’s a happy sugary ending for everyone, which is definitely not noir.

I knew nothing about Key Witness before I found it on DVD. I didn’t even recognize the actors, which turned into a huge plus. I had no idea what to expect from the plot, which meant that there were several surprises, something I always enjoy in any story, on film or in print. I enjoyed it a lot more than I ever expected to; I enjoyed it enough to see it twice in one day, which admittedly was not hard to do for a film that is barely over an hour long.

Key Witness does have many noir elements: an extended flashback, murder, mistaken identity, trading identities with a corpse on the side of the road. Describing the film like this makes it seem thoroughly noir, but the ending and Milton Higby’s fantasy life and inventions dilute its noir-ness a bit. In spite of its drawbacks, Key Witness is a good choice for about an hour’s worth of entertainment.