If The Missing Person had been filmed in, let’s say, 1947, it would be called a film noir by viewers today. It has the cigarette-smoking detective, the jazzy soundtrack, cover-ups and betrayals, cynicism running throughout, the long-lasting effects of trauma, and the crime of the September 11 terrorist attacks on the World Trade Center and the Pentagon as part of its background. 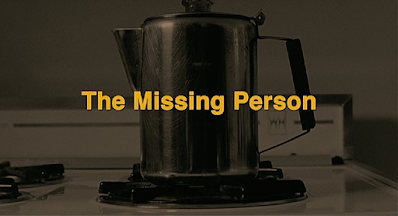 I saw the film for the first time earlier this month, in September 2021, twenty years after the attacks and less than a week after the U.S. withdrawal from Afghanistan. The coincidence couldn’t be ignored: I decided to post about the film in observance of the twenty-year anniversary of 9/11.

I want to emphasize the point that this article about The Missing Person contains spoilers because part of the joy of watching the film is the steady reveal of details and backstory for the characters. Even acknowledging the backstory of 9/11 is a giveaway. The Missing Person is the kind of film whose main plot thread involves a private detective’s investigation of one case, but the background details that he uncovers and what we learn—about the private detective especially—as the plot unfolds are really what make the story interesting and give the characters their depth.

At first, the significance of the film’s title—The Missing Person—seems obvious: the missing person is Harold Fullmer, the man who is the subject of private detective John Rosow’s mysterious investigation. The title is loaded with meaning, however, and it’s impossible to know that until you have seen the entire film. As Rosow travels from Chicago to Los Angeles and then to Mexico to tail Fullmer, it slowly becomes clear that Fullmer isn’t the only person who is missing.

The film starts with a black screen, then an overhead shot of John Rosow asleep on his back in bed. Rosow’s voice-over narration says, “I coulda lied there forever. But the phone rang.” And the phone rings and wakes him—or almost wakes him. At first, Rosow picks up the wrong phone: the landline instead of his cell phone. Then he assumes the lawyer on his cell phone is from a debt collection agency. But it’s Drexler Hewitt, an attorney requesting his services. Hewitt wants him to hop the California Zephyr (the name of a train line between Chicago and Los Angeles) and tail a man because the last private detective had to quit. When Rosow wants to know how Hewitt found him, Hewitt says that Gus Papitos of the New York Police Department (NYPD) recommended him. Papitos, or Pappy, as Rosow calls him, is an old friend apparently.

Charley, Hewitt’s secretary, comes to the front door of Rosow’s grubby, one-room apartment while he is still on the phone with Hewitt. Unbeknownst to Rosow, he has been talking on a conference call. She gives him an envelope containing photographs of the man Rosow will be tailing (no one tells Rosow the man’s name at the start of the investigation), and an envelope with lots of large bills in it. Payment in cash should be raising red flags, but Rosow needs the money, of course. 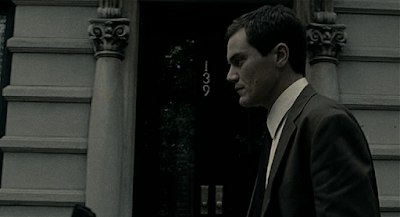 The opening credits start about six minutes into the film, and they appear over John Rosow’s preparations to start his day and the investigation. The title card appears over his coffeepot on a gas stove. The rest of the credits continue over running water from a showerhead and Rosow shaving, getting dressed, drinking coffee laced with whiskey, and looking haggard as he walks down the streets in his neighborhood. Each shot behind the credits gives viewers an idea of what Rosow’s daily routine would be—if he had regular employment and a daily routine, that is.

Rosow is sorry that he took the job when he sees that Fullmer is traveling on the train with a young boy. He calls Hewitt in exasperation about not being told enough about the case, but Hewitt cannot be reached directly, as he had promised. Rosow talks mostly to Charley when he calls Hewitt’s office. These phone calls give Rosow the chance to continue trying some verbal repartee with Charley, even though his attempts fall flat. 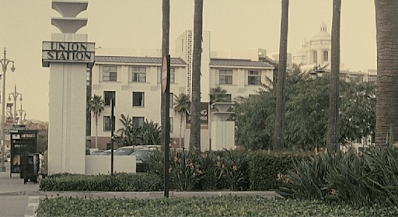 In the meantime, Rosow drinks too much and falls asleep on the train. He wakes up when the train pulls into Union Station in Los Angeles. While asleep, he dreams of a young woman. Perhaps it is from a happier time, although the woman doesn’t look particularly happy, and she never makes eye contact with the camera or with Rosow. She is inside a theater, leaning against a wall and chewing a nail. His dream is in full rich color, as is Los Angeles when Rosow arrives there.

Rosow gets a hotel room in the same hotel as Fullmer with the help of the hotel’s receptionist, Mabel. He tells her that Fullmer is his friend and that he is worried about his drinking. He wants a room near him so that he can help if Fullmer is in trouble. Mabel tells Rosow, “Trouble is my middle name,” and gives him the key to the room next door to Fullmer. But Mabel isn’t the one who gives Rosow trouble. When Rosow decides to give the hotel bar a try, a woman named Lana sends a drink over to him via a cocktail waitress. He and Lana go back to his room, and she does her best to seduce him, but he would rather slow-dance. The film cuts rather abruptly to the next morning. Rosow is fully dressed, sitting on the edge of the bed. He takes a picture of Lana asleep in bed with his new cell phone (Charley had instructed him to purchase one with a camera). He sends the picture to Charley while he is following Fullmer in a cab through the desert to Mexico. 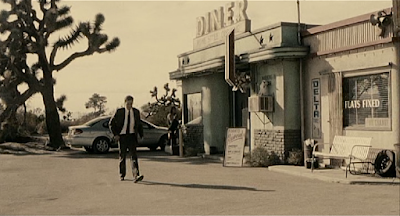 On the desert highway, Fullmer and the young boy stop at a roadside diner that looks like something right out of Detour (1945, starring Tom Neal and Ann Savage). Rosow pulls his rental car into the dust outside the diner and stops to talk to Fullmer’s cab driver, Hero Furillo, to find out where Fullmer is headed. They talk about growing up in New York City and about the movie Serpico. Rosow convinces Furillo to let him ride in the trunk of his cab so no one will spot him. Fullmer leaves the boy in Mexico, and Rosow is punched in the stomach for trespassing on private property. He’s not quite sure what he found out by stashing himself in the trunk of Furillo’s cab.

Lana is still in John Rosow’s hotel room when he returns from Mexico. He wants to know who she is working for. When she tells him that she works for herself, he strong-arms her into admitting that she works for Gus Papitos of the NYPD. She bashes Rosow in the head and knocks him out in retaliation for his strong-arm tactics. The cell phone ringing brings Rosow to consciousness. It’s Hero Furillo, the cab driver who liked the Serpico film. He wants to know if Rosow needs a ride to Union Station because that’s where he just dropped off Harold Fullmer.

The next shot is of the cab making its way to the entrance of the train station. When Rosow gets out, Hero Furillo tells him that he sure hopes Rosow is doing the right thing. He knows that he will probably never see Rosow again, so he will never know one way or the other. Rosow tells him that everything is complicated. Hero Furillo admonishes Rosow and tells him that he should do what Serpico would do. Rosow promises to do right by Hero Furillo. 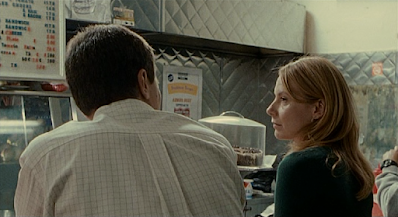 What follows is the rest of Rosow’s investigation and his dawning realization that everything he had been told is not what it seems. But this time, he does his best to do what he thinks is best for himself and everyone else. His last words in the film harken back to the words Hero Furillo used outside Union Station. But Rosow isn’t addressing his thoughts to Furillo. He addresses his late wife, who has been in his thoughts from the start: “. . . Sometimes, I think back to that day at Mrs. Fullmer’s place, and I ask myself, ‘Did you do the right thing?’ I don’t know. What is that, the right thing? A police reporter once said that when we pass beyond the lights of a precinct station, we go into another world, a place beyond right and wrong. [pause] I don’t really mind living this way, quiet, not much to say. But sometimes, every once in a while, I remember back to when I had you.”

I mentioned already that the film’s title—The Missing Person—is loaded with meaning. It most certainly applies to Harold Fullmer, but it could apply to John Rosow’s wife. It could also apply to Rosow himself. He could be described as missing from his own life. He is drinking heavily and grieving over the loss of his wife. In fact, he is hired for the Fullmer case because he is expected to drink too much and “muck it up,” as he says. Michael Shannon is perfect as the beleaguered John Rosow. He has a repertoire of grunts, monosyllables, and barely audible sounds that portray his sorry state of affairs really well, whether it’s recovering from an alcohol binge, waking up from a flashback dream, or regaining consciousness after some physical injury.

The soundtrack is also perfect for this film. The jazz, a favorite genre of Fullmer’s, and the old-time rock ’n’ roll that Rosow likes for slow dancing suit the mood and the characters perfectly. The jazz is a pleasant throwback to the noirs of the 1940s and 1950s. The color is so washed out for so much of the film that I almost wondered if most of it had been shot in black and white or maybe in sepia tones. Sometimes, between shots, all viewers see is a black screen. I found it disorienting a couple of times, but that is probably the point. It helps viewers sympathize with John Rosow and his almost constant state of disorientation.

The writer and director, Noah Buschel, even makes good use of cigarettes and smoking in this modern take on noir. In the 1940s and 1950s, almost everyone smoked, including actors and their characters on-screen. In 2009, when The Missing Person was released, smoking was a habit that was long-recognized as unhealthy and frowned upon. John Rosow isn’t making any attempt to quit smoking, and he is reminded almost constantly that he’s not allowed to smoke “in here”: cabs, restaurants, hotel rooms, almost everywhere he goes. It adds a bit of humor to a very dark, very noir story. 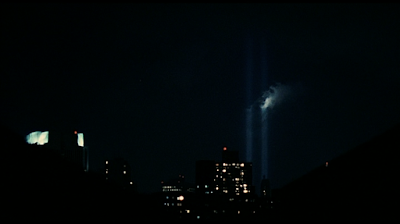 I enjoyed The Missing Person even more than I thought I would. I was anticipating a rather uncomplicated story about a private detective who is hired for a job that he is increasingly doubtful about as he plods along, and that is certainly the main story line. But all the characters, especially John Rosow, have complicated backstories that are slowly revealed through the main narrative. It’s the kind of story that makes me want to see it twice, to make sure that I didn’t miss anything—so I did see the film twice, twice in one day.

Distributed by Strand Releasing  •  Produced by The 7th Floor, Apropos Films
Posted by Marianne at 4:42 PM