Phantom Lady is an odd film in some ways. I doubt it was trying to make any statements about women in 1944, but I couldn’t help noticing the roles, both positive and negative, that women played in the film. And about halfway into the narrative, different characters talk about normalcy versus insanity in relation to criminality. Although the film doesn’t make any final judgment about this point either, it is still an interesting theme. 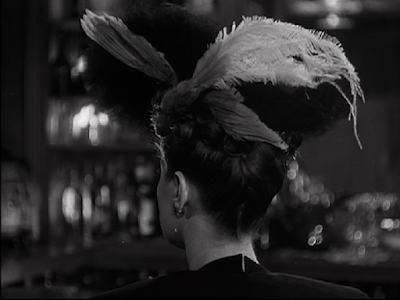 ◊ The Trial and Verdict

I may as well divide my blog post into three distinct parts, too. I made up these titles for each part of the film and for the sections of my blog post. (The film isn’t quite that obvious about its three acts.)

First after the opening credits is a shot of a woman’s head and her hat, which is taken from the back. When the camera pans out, viewers learn that she is seated at a bar (it’s called Anselmo’s). Another customer, a man named Scott Henderson, enters the bar, sits next to the woman, and offers her two tickets to a show at the Casino Theater because, he says, he has been stood up. She agrees to go—on the condition that they do not share names or addresses. He agrees. At this point, viewers don’t know who the two bar customers are either. 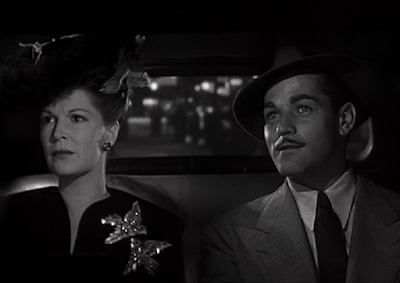 Scott Henderson offers to buy his nameless date a nightcap when they stop in front of Anselmo’s after the show. She refuses and enters the bar alone. When Henderson arrives home and is inside his apartment, a detective, Inspector Burgess, turns on the light switch just before Henderson can. Other detectives are also in the apartment because Scott’s wife Marcella has been murdered. Of course, the detectives consider Henderson their prime suspect.

During questioning, Scott Henderson, a civil engineer, admits that he and his wife were having marital problems. The day of the murder was their anniversary, but his wife wasn’t interested in celebrating. He asked her for a divorce, but she refused him. The detectives comment on Henderson’s occupation, nice clothes, and specifically his tie. Marcella, they tell him, was strangled with one of his ties. 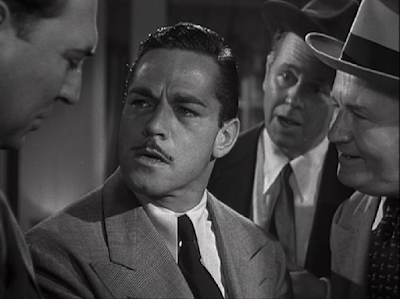 As part of the subsequent investigation, Lieutenant Burgess takes Henderson back to Anselmo’s. The bartender doesn’t remember the woman but he does remember Henderson. He claims that Henderson was in the bar alone. The cab driver who took Henderson and the phantom lady to the Casino Theater for the show is Al Alp. He remembers Scott Henderson, but he also claims not to remember the woman. Estela Monteiro, the singer at the Casino Theater, says that she doesn’t remember anyone in the audience, including the woman wearing the same hat as she wore in the show that night.

◊ The Trial and Verdict

The trial and verdict scenes compose the shortest, most compact segment of the film. It is an odd trial: Several witnesses can remember Henderson, so he and they can account for his whereabouts, but he is still on trial because no one besides him admits to seeing the woman who went with him to the Casino Theater. Henderson obviously didn’t use the tie that he was wearing that night to kill his wife because he was wearing it when the detectives first saw him, and the murderer could have taken one of Henderson’s ties in the apartment. He did have a motive, however, because his wife refused to grant him a divorce.

Henderson is found guilty and will be executed for his crime. Carol Richman, one of his employees, has been in the courtroom every day of the trial. During the trial, she and Inspector Gomez exchange glances: The camera specifically focuses on both of them. Do they know each other? Were they working together? The uncertainty, of course, adds to the mystery.

After the trial, Carol Richman visits Henderson in prison. (Scott calls her Kansas because she is originally from Wichita, Kansas.) He hasn’t reached out to any of his friends for help because most of them have abandoned him. His best friend, Jack Marlow, left for South America the night of the murder. Henderson hasn’t contacted him for help because he doesn’t want to impose on him; he doesn’t even want to tell him the news. 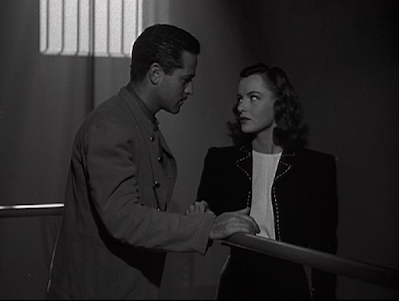 Richman goes to a lot of trouble for Scott Henderson. She decides to investigate the circumstances surrounding Marcella Henderson’s murder—and she puts herself in dangerous situations. One example is her decision to talk to the bartender at Anselmo’s. He is unsettled by her presence and by her suspicions. She follows him after his shift to the subway platform. The tension builds as it becomes clear that he plans to push her in front of an oncoming train. The only thing that appears to save her is that another passenger arrives on the platform. 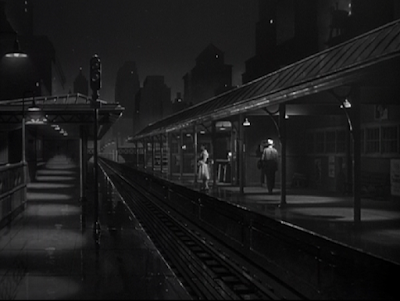 When Richman returns home from this unsettling beginning to her amateur investigation, Inspector Burgess is inside her apartment. Their exchange is tense until he talks about feeling a bit guilty about Henderson’s sentence and his profession of innocence. Inspector Burgess offers to help Richman investigate the case further, but it cannot be official business because the case file is closed for the police.

The tension in Phantom Lady starts with the mystery of Marcella Henderson’s murder, but the tension increases when viewers learn the identity of the killer before the police and Carol Richman do. When Richman visits Scott Henderson in prison eighteen days before his scheduled execution, Henderson’s best friend Jack Marlow shows up, too. From this visit and from details revealed during Richman’s investigation, viewers now know that he is the killer. The tension escalates when Marlow inserts himself into the ongoing investigation.

Carol Richman, Inspector Burgess, and Jack Marlow try to find Estela Monteiro and the lady wearing the infamous hat. While Richman continues investigating, Burgess and Marlow discuss the progress of the investigation. Burgess says that he is out of suspects because they are all “too normal.” Marlow bristles at this: He wants to be normal enough but extraordinarily clever, clever enough to outwit all investigators. When Burgess describes murderers as “paranoiacs,” Marlow’s hands begin to shake and he says:

• Marlow: “That’s simply your opinion. A psychiatrist might disagree.”

• Inspector Burgess: “No. I’ve met paranoiacs before. They all have incredible egos, abnormal cunning, a contempt for life.”

• Marlow: “You make him sound unbeatable.”

The issue of normalcy versus insanity comes up a few times in Phantom Lady. Carol Richman learns that someone named Ann Terry had a duplicate hat made. Richman finds Terry, who is under the care of Dr. Helen Chase because Terry suffered a collapse when her fiancé died the previous April. Terry doesn’t want to talk to anyone, but Dr. Chase, a female authority figure in this situation (unusual for a 1940s film), insists that Carol Richman is not a person to be afraid of. Dr. Chase doesn’t know Richman and doesn’t know whether she is dangerous or not. Jack Marlow accompanied Richman to Ann Terry’s home, so they are all in the company of an extremely person. 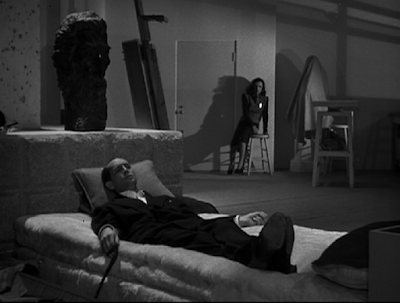 This scene struck me for a second reason. Dr. Chase is the authority figure, and she uses her own judgment to influence her patient. I’m guessing that, in 1944, doctors were viewed with a lot of respect, and their judgment wasn’t often questioned. In this case, the doctor is a woman, and she still asserts her authority. She just happens to be right about Carol Richman, but she isn’t about Jack Marlow. And by today’s standards, she should have left the decision to her patient in the first place.

The issue of normalcy versus insanity comes up again in Jack Marlow’s apartment, when Carol Richman realizes that Marlow is the murderer and that he has her trapped:

• Marlow: “What’s any life compared to mine?”

• Richman: “This won’t help you, don’t you see? After me, there’ll be others. You’ll have to go on killing, on and on until they catch you!” 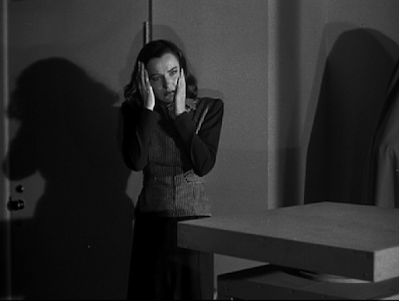 I found this scene particularly interesting because Richman is hysterical with fear, and she has every reason to be afraid. But women are often portrayed as hysterical in films from the 1940s and 1950s, and “hysterical” is always a negative character trait. I did keep wondering why Richman didn’t grab one of Marlow’s tools from the table in his apartment to try to defend herself. If she had, she might not have had to wait for Inspector Burgess to show up in time for Marlow to commit suicide. Marlow is always cool, calm, and collected. He gives no indication that he will jump out a window to his death. But Richman’s assessment of Marlow is accurate because he is the one who is closer to insanity, and he is definitely closer to criminality.

Maybe other viewers wouldn’t even focus on these points about women’s roles and about normalcy versus insanity. After all, Phantom Lady is also a fun mystery, a puzzle, to solve, and I enjoyed it for that reason. The film starts with an interesting premise: that a woman and her hat are important clues to a murder mystery, and they would have gone unnoticed except for the perseverance of one character. My one complaint is that the mystery depends on so many people taking the murderer’s offer of money to stay quiet about the phantom lady. It’s easier to believe that the murderer would have methodically killed them off, one by one!