I started watching Between Midnight and Dawn and thought at first, “Is this really a film noir?” Everything about the story and the main characters seems rather genial, even though the opening music and camera shots are ominous, and a voice-over narrator begins the film by telling viewers that it’s the patrol officers who arrive first on the scene of a crime: “Their battleground is every city street.” 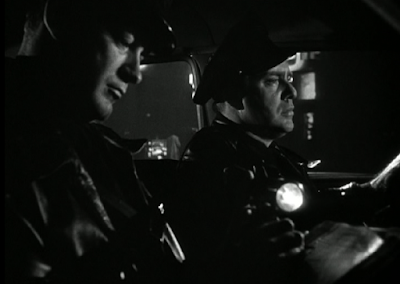 From the little that I could find about the film, the story was written originally to focus on the two patrol officers, and the plot was much darker than the one that the film ultimately portrays. I think Between Midnight and Dawn is also one of the first films to focus on police officers and not police detectives or private eyes.

The story starts with Officer Rocky Barnes and Officer Daniel Purvis patrolling their unnamed city. They respond to a call and find two women sitting in a parked car on a dark street. The officers put the two women in their patrol car and call for backup; they strongly suspect that the two women are acting as lookouts for their boyfriends. Barnes and Purvis investigate the building at the address. Once inside, someone starts shooting at them. Two men are arrested, as are the two women sitting in the patrol car, and all are taken to the police station.

One of the women becomes hysterical about being arrested. She is a juvenile, only seventeen, and this arrest is her first. She is given a warning only. Later, when the officers are back in their patrol car, Officer Barnes expresses sympathy for the hysterical female. He is more hopeful about some people being basically good and their prospects for rehabilitation. Officer Purvis is much more cynical. He thinks the younger female offender will be making shivs and using them on officers before too long.

(This blog post about Between Midnight and Dawn contains spoilers.)

The officers’ next stop is Romano’s Restaurant. Someone threw a stink bomb through the window of the restaurant, and no one is talking. Officer Purvis decides that he and Barnes should go to Ritchie Garris’s Starlight Club because he’s pretty sure that one of Garris’s boys did the crime. These two officers are not perfect, certainly not by modern standards:

◊ Officer Purvis does not seem to have any proof, just a hunch, about who is responsible for tossing the stink bomb.

◊ Outside the Starlight Club, they search Garris’s car without a warrant, but they do find a couple of stink bombs.

◊ The officers have evidence that they have obtained illegally and no witnesses, but they proceed to the nightclub’s offices to arrest Joe Quist, one of Garris’s associates.

Garris walks into the offices before they leave and tries to bribe the officers, but they refuse his offer—on this moral point, they are adamant. Their refusal enrages Garris, who threatens both officers and warns them not to come back.

Officer Barnes likes the voice of one of the women working in the Communications Department at the police station. The Communications Department employees relay tips and information to patrol officers in their cars. He is determined to find out if her face is as attractive as her voice, and he succeeds in finding her in Lieutenant Masterson’s office. He impresses her enough to convince her to go out to dinner with him—and with his partner Officer Purvis! 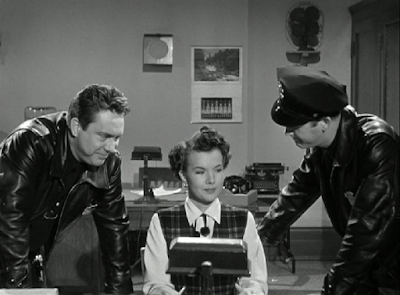 If this isn’t odd enough, Barnes and Purvis take Katy Mallory to the Starlight Club, the nightclub owned and run by the known gangster Ritchie Garris. Purvis wants to case the joint, and his effort is a success because another known gangster, Leo Cusick, shows up. Purvis leaves their table to tip off detectives. Thus, the two patrol officers are willing to mix dangerous business with pleasure. Officer Barnes takes things a step further by saying something tasteless to Katy (his date? their date?) about Garris’s girlfriend, Terry Romaine. Romaine is the singer at the Starlight Club, and he finds her very attractive. Viewers—and Katy—know this because he says to Katy, “She’s not a bad-looking doll.” His comment gives Officer Purvis the chance to express his disgust about Romaine and call her a tramp because she is dating a gangster. Once again, Barnes and Purvis prove that they are not perfect. 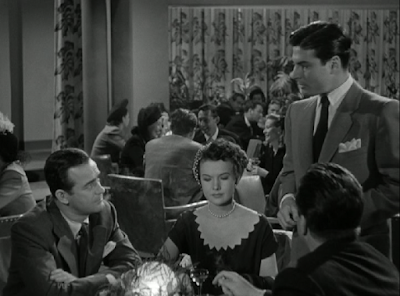 The police intelligence department follows up on Purvis’s and Barnes’s tip about Cusick’s appearance at Garris’s club. Cusick and his associates plan to open a base of operations in the city at a business called Premier Loan Company on Orchard Street, a few blocks away from Garris’s club. Both locations are in Purvis’s and Barnes’s district, and Lieutenant Masterson instructs them to keep their eyes and ears open for information. The setup for conflict between Garris and Cusick, and between the officers and Garris, is on.

Kate Mallory goes home after her date with both men without agreeing to see either one of them again. She and her mother talk about Kate’s unwillingness to date a police officer. Kate doesn’t want to go through what her mother did when her father was killed in the line of duty. She lives with her mother in a two-family house, and they are trying to rent the flat next door. Her mother does have some good news: She has rented the flat in their two-family home to what she calls “a nice couple.” They are moving in that very night, and Kate is the first to answer the door when they hear a knock.

And I was as surprised as Kate is when she opens the front door and finds Officers Purvis and Barnes, in uniform no less, on the front porch. Yes, Officers Purvis and Barnes work together and live together. They were roommates even before they rented Mrs. Mallory’s apartment. They have known each other since they served in the marines during World War II, when Barnes started calling Purvis by the nickname of Pappy. And, of course, they go out on a date together with Katy Mallory. By now, I was asking myself again, “Is this really a film noir?”

When the narrative does turn dark, it’s a bit of a surprise because the film also seems like it’s turning into a romance rather than a noir. By the time Ritchie Garris is on the run and shows up at Terry Romaine’s apartment, viewers can’t be sure what will happen next. When Kathy Blake, Romaine’s child neighbor, knocks on Romaine’s front door, Garris forces Romaine to let the child in. He wants to use Kathy as a shield for their escape. The police get Kathy’s parents to try coaxing their daughter out of the apartment, but Ritchie won’t allow Kathy to leave. Terry Romaine is getting worried about Kathy’s safety, and with good reason. Garris realizes that the police have the building surrounded and threatens to drop the child out the apartment window if they don’t disperse and leave the apartment building. I squirmed waiting to see what was to become of Kathy. 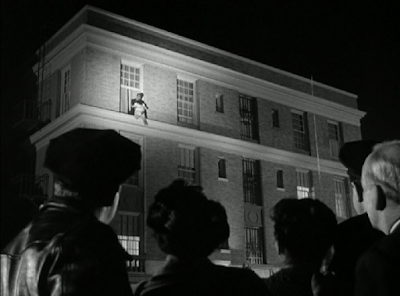 Between Midnight and Dawn really is a film noir, even if it takes its time and some detours getting to that point. I knew next to nothing about it before I saw it on DVD. Even a search online produced precious little, which is surprising because Edmund O’Brien is no noir lightweight. And Mark Stevens has been a favorite of mine since I saw him in The Dark Corner opposite Lucille Ball, a film I have seen several times. It was the subject of my first blog post (click here to read it).

Between Midnight and Dawn may have benefitted from a little more detail and background information because I wanted to know more about the three main characters, Officers Barnes and Purvis and Katy Mallory. Maybe the script as originally written would have done just that, but the actors playing those parts make the film a good one to see. And Edmond O’Brien, an actor who often plays the mobster or the troublemaker in films noir, gets the girl! Talk about a surprise ending.