October 25, 2000, release date
Directed by Claude Chabrol
Screenplay by Claude Chabrol and Caroline Eliacheff
Based on the novel The Chocolate Cobweb by Charlotte Armstrong
Music by Matthieu Chabrol
Edited by Monique Fardoulis
Cinematography by Renato Berta 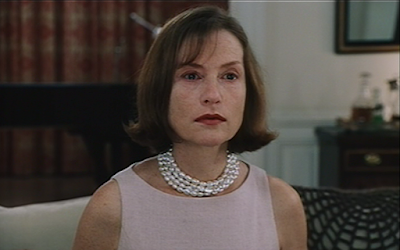 “A tendency to desire evil, often with a certain pleasure.”
—Definition of the word perversity according to the Petit Larousse. 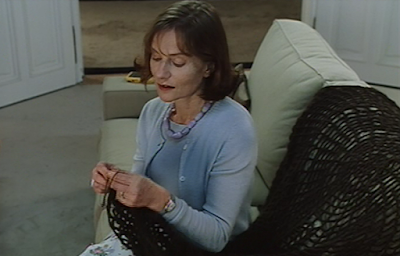 The film is based on Charlotte Armstrong’s The Chocolate Cobweb. The story is updated for the period in which the film was made (it was released in October 2000), but Merci pour le chocolat is a remarkably close adaptation of Armstrong’s novel, which was published in 1948. The director Claude Chabrol pays homage to the source material by incorporating Marie-Claire’s crocheting project: a large afghan in the shape of a cobweb! The yarn is even a chocolate-brown color.

Merci pour le chocolat opens with only a few credits—four short lists—and then a marriage ceremony: André Polonksy and Marie-Claire Muller are marrying each other for the second time. Various snippets of conversation among the guests at the wedding reception provide some odd observations that put viewers a bit on edge, for example:
◊ Patou Dufreigne, the manager of the Muller Chocolate factory, which Marie-Claire owns, says of André: “I admire him as a pianist but, as a man, he bothers me.”
◊ Dufreigne tells the same group of wedding guests, “A low-key wedding is better this time” and “The first one was so luxurious. There were 500 guests. And look where it got them.”
◊ The woman who officiated at the wedding ceremony tells Marie-Claire, “I know you like my own daughter.” Marie-Claire responds, “Personne me faite, ma chérie” (translated as “I’m no one’s daughter”).
Even when others are speaking or starting their lines of dialogue, the camera focuses on Marie-Claire. It’s almost as if she is listening to each conversation, but the way that she is photographed, viewers know that this is impossible.

The remaining credits appear over shots of a ferry crossing a rather large body of water. The ferry slips toward a dock, and the camera pans down to two women seated at a restaurant table across the street from the dock. The women are waiting for other people, Axel and Jeanne. When Axel and Jeanne arrive, the four order meals. Then the film cuts to them on the restaurant’s outdoor patio, where they drink coffee and have dessert. From their conversations, viewers ascertain that Axel and Jeanne are the children of the two women, but nothing is said directly about the relationships between the characters. Axel asks Jeanne if she would like to see a movie, and his mother produces a newspaper. While searching for theater listings, she finds Marie-Claire Muller’s and André Polonski’s wedding portrait and wedding announcement, both of which bring up a rather odd familial secret.

The connection between the Polonskis and the Pollets is explained by Axel’s mother, who knows the secret, to Jeanne, who is instantly curious about this story that she has never heard before. When Jeanne was born, there had been a mix-up at the hospital. It seems André Polonski thought Jeanne was his daughter, when his wife had actually given birth to his son, Guillaume. The hospital had run out of baby bracelets and used the first three letters of the families’ names (P-O-L) to identify each newborn. A nurse showed the wrong baby to André, and Jeanne’s father had to straighten out the facts.

Jeanne, still curious about this bit of family lore, decides to visit the Polonski home, where she introduces herself as the Polonski daughter that almost was. She shares her musical talent with André: Both play the piano. Jeanne is not above using her newfound knowledge about the name mix-up to insinuate herself into André’s good graces, and she is more than happy to return to the Polonski home to take up André’s offer of some piano coaching.

But Jeanne is not so smitten with her good fortune that she ignores some warning signs. While studying a framed portrait of Lisbeth Polonski, André’s deceased wife and his son Guillaume’s mother, she sees Marie-Claire purposely spill some chocolate that she had prepared for Guillaume. Jeanne is suspicious, so she asks her boyfriend Axel to test the chocolate residue on her sweater. (She had accidently stained the sweater helping Marie-Claire with the cleanup.) Axel is a lab assistant at Louise Pollet’s criminal laboratory, and he finds that the chocolate stain contains residues of Rohypnol, a benzodiazepine. 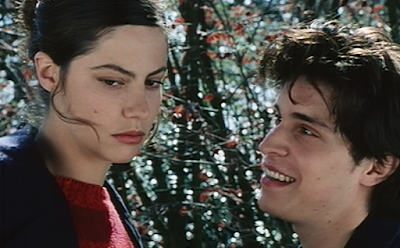 Jeanne warns Guillaume, who refuses to believe her at first. He calls her crazy and tells her that she is out of her mind. He is annoyed because Jeanne imitates his mother’s poses in the photographs around his home, and he doesn’t appreciate the way Jeanne fawns over his father by imitating André’s piano technique. But as Jeanne and Guillaume continue to talk, he begins to describe the circumstances of his mother death. As a result of that conversation, he begins to wonder if there is something to Jeanne’s story and to her suspicions about Lisbeth Polonski’s death. Now both become wary of Marie-Claire—and with good reason.

This post started with a definition of the word perversity, which is actually a quotation from a featurette on the DVD that I watched called “Introduction by Claude Chabrol.” The featurette is a short text essay, and its discussion of the word perversity sums up the character of Marie-Claire, although her name is never mentioned in the feature. Marie-Claire and her husband André share a conversation that reveals her perversity to her husband; viewers, on the other hand, already knew that she was capable of inflicting harm:
• Marie-Claire: “I have a knack for doing wrong.” [Film cuts to Jeanne and Guillaume in the car, with Jeanne driving. They hit a wall and the screen goes black.] “It’s wrong when I pervert good. The more violent it is, the more it appears good. I give, I give, I give, and I can never ask. I didn’t even ask to live.”
• André: “You received life like everyone else. You can’t deny that.”
• Marie-Claire: “I don’t understand. I never understand when you speak. I know what I am. I’m nothing. So . . . .”
• André: “What have you done to them? Tell me what you’ve done. You know how I cherish Guillaume.”
• Marie-Claire: “You should tell him. Guillaume’s like me and we’re not like you. My mother never thought I was a genius. I’m just a hanger-on.”
• André: “You don’t realize how much you’ve helped me. Thanks to you, I . . .”
• Marie-Claire: “I know, I help everyone. I helped Lisbeth too.”
• André: “But you adored Lisbeth . . .”
• Marie-Claire: “I let her do what she wanted. I only put Rohypnol in her cognac.”
• André: “Why did you do it? You loved her . . .”
• Marie-Claire: “That makes no difference. Instead of loving, I say, ‘I love you,’ and people believe me. I have real power in my mind. I calculate everything. It’s in God’s hands. I think I need to feel tired occasionally. You understand? Why am I telling you all this?”
• André: “What have you done to them?”
• Marie-Claire: “To whom?”
• André: “The children.”
• Marie-Claire: “Nothing. Why would I do anything to them? I put Rohypnol in the coffee. Are you angry?”
• André: “What a question!”
• Marie-Claire: “Are you angry?”
• André: “You fool everyone.”
• Marie-Claire: “Some people fool themselves.
The way that Marie-Claire talks with her husband about his son Guillaume and Jeanne, who he has been coaching, is chilling. And yet she has two lines that stand out for their lucidity. When André says that he cherishes Guillaume, Marie-Claire responds, “You should tell him,” which makes perfect sense because André devotes so much of his time and energy to his music. When André tells Marie-Claire that she has fooled everyone, she seems to imply that it was easy and that she really did nothing when she says, “Some people fool themselves.” 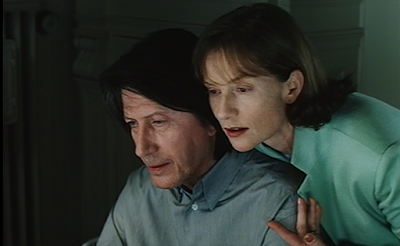 The first time that I saw Merci pour le chocolat, I was confused by the opening sequences, which made it hard for me to follow the plot and identify the relationships between all the characters. The opening wedding sequence ends with the woman who officiated at the marriage ceremony asking Marie-Claire about taking a photograph of the newlywed couple: “Sorry, I have a favor to ask. For the press . . . A photo. Just one little photo.” When the film cuts to Louise Pollet at the restaurant with her friend, the connection between them and Polonskis isn’t introduced right away. Louise Pollet and her friend sit at the restaurant waiting for other people, but viewers have to infer from the conversation that the two people are their children. And the newspaper story about Marie-Claire Muller’s and André Polonski’s wedding, accompanied by the wedding photo, comes rather late in the sequence, when Axel’s mother finally explains to Jeanne the story about André Polonski thinking that Jeanne instead of Guillaume was his child. 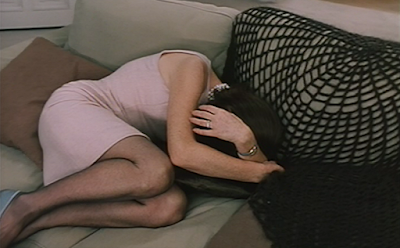 After my first viewing, I read Charlotte Armstrong’s book, which helped me follow the plot of the film more easily when I saw it a second time. The story is updated to 1999 and 2000, when the film was made and released, respectively, but Merci pour le chocolat is a remarkably close adaptation of Armstrong’s novel. Whether or not you read the novel, Merci pour le chocolat is one of those films where it really helps to pay attention to every detail. And Isabelle Huppert is superb in the role of Marie-Claire. The perversity of the character is unsettling, and Huppert doesn’t shy away from showing Marie-Claire’s complexity. The setting and the family seem ordinary on the surface, but Huppert’s performance allows us to see all the cracks.

My blog post about Merci pour le chocolat is my entry for the Vive la France! Blogathon. Click here for the complete list of participants and links to their entries. The blogathon is hosted by Lady Eve at Lady Eve’s Reel Life and Christian Esquevin at Silver Screen Modes. Click on each blog title to visit their respective blogs.
Posted by Marianne at 11:00 AM