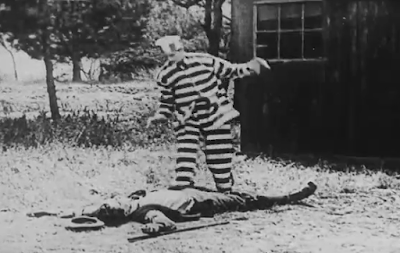 It may seem hard to believe that there could be any connection between Buster Keaton and film noir, but I think a strong case can be made for regarding Convict 13, a short film by Keaton, as an example of avant noir, or a precursor to noir. The film has many dark elements, even though it was shown as a comedy short (almost exactly 96 years ago). I’ve never been a big fan of categories, and so it’s easy for me to place Keaton’s short film in more than one category. It’s in the public domain, and it’s less than 20 minutes long; you can view it at the Internet Archive by clicking here.

The title alone is one clue that the humor has dark undertones. In addition to the obvious prison reference, the number 13 is considered very unlucky in the United States. The plot involves one unlucky break after another for Keaton.

The film begins with Buster Keaton out for a day of golf with his girlfriend. After a series of mishaps on the course, he knocks himself out with his own golf ball when it ricochets off a wooden fence. While he’s unconscious, he dreams about an escaped prison inmate who finds him unconscious and exchanges his own prison uniform for Keaton’s clothes. Keaton comes to, but he is still in the dream. Viewers aren’t made aware that the entire sequence about Keaton being a prisoner is a dream until the final scene in the film, when his girlfriend rouses him on the golf course. Although the unconsciousness is played for laughs in Convict 13, it is often a feature of film noir, and Keaton’s dream sequence leads him to some dark themes.

Keaton, now dressed as a prisoner in prison stripes, runs away from prison guards who are looking for the escaped convict. Keaton runs into the prison grounds and locks himself in the prison, thinking that he’s locking out the guards chasing him. In the prison, Keaton comes upon his girlfriend. She wants him to meet her father, who happens to be the prison warden. When the prison warden sees the number 13 on Keaton’s uniform, he tells Keaton that he is due to be hanged that day. Keaton’s girlfriend is dismayed by the news and, before the hanging is scheduled to take place, she replaces the hangman’s noose with some stretchy exercise bands that her father was using in his office. She saves Keaton, much to the displeasure of the other prisoners, who have come to see the spectacle at the scheduled time. 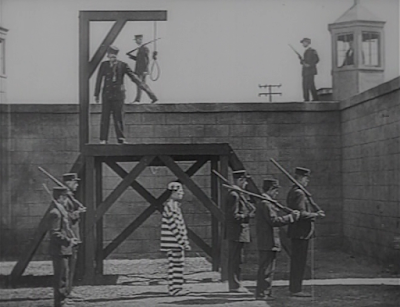 The scenes in the prison are especially dark in theme. Keaton is mistaken for a prisoner to be hanged, and everyone in the prison except his girlfriend is looking forward to his hanging. The other prisoners sit in attendance and applaud when Keaton gets to the hangman’s platform. Someone (perhaps a guard?) takes advantage of the situation and sells snacks and drinks to the prisoners. When the hangman’s noose doesn’t work because of the switch by the girlfriend, the prisoners boo. To appease the prisoners in the audience, the guard tells them that they will get two hangings the next day, after they get the noose fixed: “Sorry, boys. We’ll fix it and tomorrow we’ll hang two of you to make up for this.”

During his temporary reprieve from the gallows, Keaton is assigned to break rocks. During this task, he accidently knocks out the guard supervising him. This time it’s his turn to exchange clothes: He exchanges his prisoner’s uniform for the guard’s uniform. Another prisoner revolts and starts a prison riot. He comes to the warden’s office, takes Keaton’s girlfriend hostage, and carries her off. At this point in the plot, the humor takes an even darker turn: I didn’t find it funny that this prisoner carries the woman off. Keaton manages to save his girlfriend and all the guards by knocking out all the prisoners.

The film ends with Keaton’s girlfriend shaking him out of his unconsciousness, and they head back to their golf game. They are safe from the dark elements of Keaton’s imagination (Keaton’s close call at the gallows, the prison riot, the girlfriend’s abduction) because they weren’t real in the first place. Otherwise, they would be frightening, perhaps too much so, even for a film noir.
Posted by Marianne at 8:53 PM